Hullo All… have you forgotten who I am?!
Well me deari-o’s I have been feeling rather poop (certainly not Tickety Boo as my name suggests) for what seems like forever, so this has meant that I haven’t been very post happy-or rather, I’ve been very post unhappy.
So here is a little something to get me back into the run of things…


Inspired partly by a meeting with an old Gypsy Woman the other day, and a post on Vintage Peasant blouses by Lauren at Wearing History (My how my blue eyes turned green once I had seen her blouses!)
So for this post I decided to turf out my drawers in search for my little bloose (blouse). I went through countless drawers which seem to be packed full with a scarily large amount of vintage tablecloths…… shame I haven’t got a table to put them on isn’t it! (I lie, I have but it’s in the summerhouse) Well, I’m wondering off the point, and anyway it turned out it wasn’t in any of the places I searched, but in a plastic box instead. A box that is filled with a load of old holey undies- grrrrr, typical- my room is now in even more of a mess, all for a sake of a blouse that I cannot wear due to its delicate condition!

I’m very fond of the peasant blouse- especially the 30’s ones, all smocking and embroidery- the ones to be worn with much gaiety to match the many colours and patterns.  Like these little peasant wonders…. 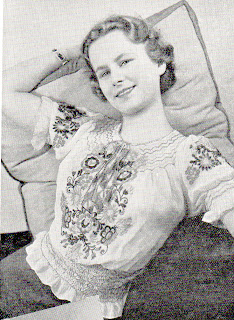 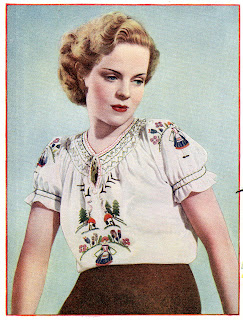 My little lovely on the other hand is rather more sedate, and is made from a white crepe, with smocking of the brightest colours at the shoulder and on the ickle sleeves (the middle of the cuff). Flowers and bows adorn the bodice, while the collar and neck is edged with a two colour zig zag type stitch- all very pretty, and all very suitable to wear while yodelling (well ? hmmm…). At the waist point, a few inches above the hem there’s a channel where once upon a time elastic was cased, but that’s has long been lost- not to worry, as this blouse has been put into retirement, due to holes and it’s delicate state…. One last wear won’t do it any harm now, would it…….! 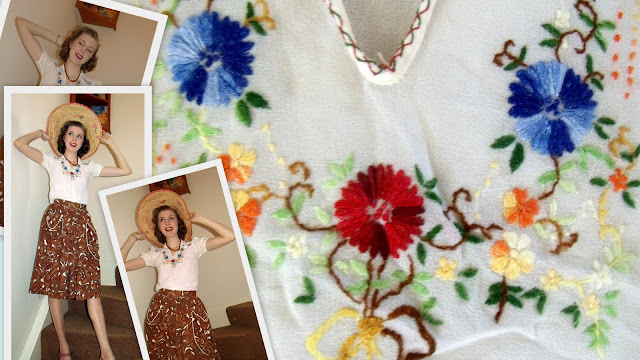 Ooo, I nearly forgot to mention what the ‘old gypsy lady’ (her words not mine!) told me… well, apparently I’m going to travel (can’t be far as I haven’t a passport- hmm, always fancied the idea of a pilgrimage to though.),…. I’m going to be going places (did she mean I’m going to make something of myself?)…., and this, the most laughable and interesting…two boys are in love with me, yet I’m only in love with one of them! Well if these two boys are in love with me, I certainly don’t know about them!! Ah, it was going so well until the last bit….

I shall love you and leave you until the next post with a pic (yes another!) of yours truly in today’s house attire- groovy eh?! 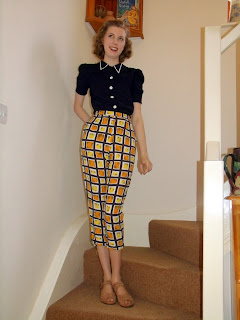 Lots of love mummy (hehehe, sorry but I s'pose it could be worse ma!)
from your loving daughter...
Tups xxxxxxxxxx
Posted by Tickety Boo Tupney - A Dash OF Worcester Sauce. at Sunday, March 27, 2011 1 comment: 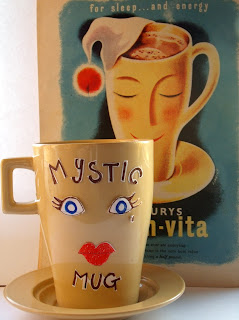 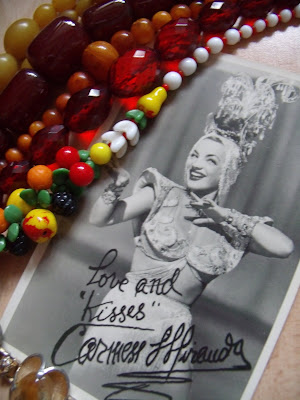 …. Carmen Miranda. Ooo arhhh!
Just a little something I picked up recently. Isn’t she just the bee’s knees?! Thinking back, I’m glad I decided to take her home… you see, I had the choice between a photo of John Gregson, or a photo of the delectable Carmen Veranda (hehe), and as I already have a cut out of John Gregson on my wall, and the fact I don’t want to be constantly reminded about Septic’s tragic end in Angels One Five, I went for Ms Miranda.
Seeing CM every morning when I wake, will cheer me up no end- I’m sure!

Couldn’t resist doing some more photographic nonsense, so Tickety here went and had a rummage through her scarf collection, pinning a few whatnots here and there in homage to the lady in the tutti frutti hat!
Just a bit of Fun!

* I would have flattened off my curly top, but it’s the first day of my weekly set and I didn’t want to go against the wave!*

Secretly I wish I could shimmy around in an outfit adorned with countless spangles, big shoulders, sporting a bare midriff, and wearing long skirts with cheeky splits…donning countless turbans or natty hats, all worn whilst fluttering some false eyelashes and doing some fancy foot work in a nifty pair of platform shoes,…but alas, I cant- I am too long and stringy with no rhythm or outfits to match, so such flamboyant fancies would be wasted! Ah well, a girl can dream…

Sun and a Film*

Yesterday, like today was such a joyous day. The sun was finally shining and there was a subtle warmth in the air- not warm 'get out the deck chairs warm' but you know, enough to take the chill factor down a peg or two- ha- take that my winter blues- we have sun…. oh and I was off to the flicks in the evening (the Kings Speech)- the first of the year, so I had things to look forward to too!
I’m afraid I got a bit carried away with such sunny weather frivolities, and  pulled out my white linen skirt and bolero suit, teamed it with a sprigged blue and green blouse, and my pink 40’s sunnies! (The only original part of my outfit! Also not pictured!). I was rather pleased to get out this costume- maybe not quite right for this time of year, but this didn’t stop me, and anyway, there was no way I was going to dress in something dull if I had to be (stuck) at work on such a lovely day.﻿﻿
In the evening I had a rummage, and had great fun picking outfits out ready for my outing- even donning completely inappropriate evening dresses- just because I was in the mood and because I could! Ok, so the full length numbers were a no-no, and there were some depressing moments when I tried on a dress that I have grown too tall for (sticks tongue out at my legs and the shortie that owned the dress originally!)- It was actually the dress I had planned on wearing, but there was no way I was going to show off my knees in public!

Finally I picked two dresses- my navy crepe and another 40’s American brown crepe dress (one with issues!) both had their good and bad points, and both went with my pink heels that I had set my heart on wearing….after all that dressing up nonsense, I picked a totally different dress (needs no excusing, I’m a girl!)- My very first in fact. Mum magically ironed it larger and longer (hurrah to the extra wears I can now get out of this dress!).
I dressed, found my 37 coronation brooch, clipped it to my favourite navy coat (my only navy coat!), slipped on my pink 40’s peeptoes and I was away to watch the kings speech.
Whilst approaching the cinema I got ‘ what on earth are you wearing’- but I didn’t care as it was hurled across the street from a right scruffy lot, and any hoo it was soon cancelled out when a very well dressed older lady complimented me on my outfit.


All in all the film was very enjoyable- quite funny in fact. Mind you, I was a little niggled about the speck of dust that kept on moving in one scene- first you see it, then it’s a shot of someone else, then back on to Colin Filth (hehe)...hang on, where’s that white fluff? But that’s just a minor quibble- but an annoying one! As for the surroundings- rather nice as modern picture houses go- luckily I was on the end of a row so I could stretch out my dying legs, wiggle my numbing arms and sort out my annoying necklace clasp that kept on catching on my ye olde beaded hairnet- darn it! Why did I wear both? (note to self: wear one or the other, NEVER both). It was soooooo embarrassing trying to untangle it in the foyer, none of my friends could do it, and it was made even more cringe-worthy by the fact every body was staring at me! Oh, the swift side glances, the ever so loud whispers and the obvious head to toe lookers- my own fault, so I can’t complain….
That’s about it for the mo- nothing more or interesting has been done in the world of Tickety Boo Tupney- not been out and I have done nuffink!!!