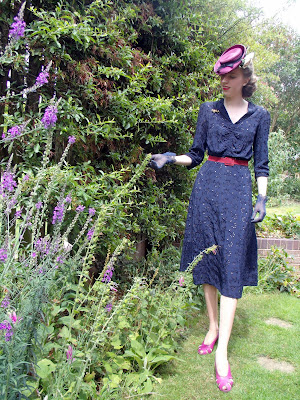 …In a navy dress that is! This little number became ‘new to me’ from yesterday, and I just couldn’t wait to take a picture. I even ventured out into the garden with my trusty tripod in tow...' Gasp'- yes, the sun has appeared, and yes, it has stopped raining long enough for me to do so! Careful, dearest Mother Nature, people might begin to think it was summer!!!

It's not the most delightful part of our garden to take a picture, but its extremely uncomfortable taking pictures of yourself in an open space. I’m especially conscious at the fact that neighbours could possibly sticky beak in and think ‘what on earth is she up to- what a ginger (well, blonde) nut!’

Well must be off- hair to set for the weekend ahead...
your

To the Woods... and then Pimms on the Terrace, Jeeves! 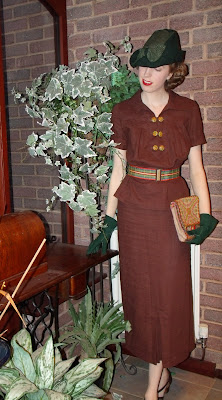 I say, its time to whip out ones hobbyhorse and set forth to the woods to meet Mr R. Hood and his band of merry men. Hehe, well, maybe not, as I think our childhood Dobby is up in the loft, plus I’m rather much taller now so I think it would need a considerably longer dowel (Like it’s even a possibility!!!). Not to mention the fact that I think it would be quite unwise for an impressionable young woman, like myself  to enter into such company(Just think of the language!) No, certainly not...well, not unless I had a chaperon anyway!

So I have talked myself out of a woodland ramble, so instead what about a nice sedate leafy garden- where croquet is played on velvet lawns and where iced lemonade is served on a sun drenched terrace?  Hmmm, yep, that’s the one for me. (Though a hog roast with merry men still holds a certain draw!)
Anyhoo, so I might not meet young Robin of Loxley, and I don’t know of such a garden but don’t you think my new outfit would be quite appropriate for either setting?! I certainly do, and if I accessorise correctly, this little ensemble should take me through a whole variety of occasions.


This 30’s ensemble is another one of Mammy’s creations. Isn’t it just splendid?! I’m so incredibly lucky. I would say that the pattern is from around 1936/37 ish (could be as early as 35, though I will stick with my original guess) and was originally a dress, but mum being mum made it into a costume so I could wear each piece with different things. Well, it’s always nice to have a change isn’t it!


So there you have it, my outfit for all occasions!﻿

Hullo there- long time no wittering.
Well me lovelies, it was my Grandpa pa’s birthday yesterday so guess what (You will never guess after reading the title!!!) on Saturday we went to an airshow. It was wondrous, if not a little on the windy/rainy/ cold side. But thankfully the aircraft on show made up entirely for the foul weather tendencies.
The day was full of lovely rumblie noises from the jets ( and no, it wasn't my tummy making itself heard at lunchtime!) and of course aircraft of all shapes, sizes and eras, while the airfield saw a littering of waterproofed clad people(including myself- but mine was flowery and matched impeccably with my burgandy 40's skirt!), airforce blue berets, and the country set in their lovely tweeds and Barbours. There were retail opportunities too- but no old junk (blah, so I wasn’t interested), classic cars, a little ww2 section with jeeps (squeeeeeeeeal!), fun fair rides (no thank you) and the most upmarket portaloos I have ever seen- none of those horrific blue plastic boxes that I have a severe aversion towards- these ones had lights, proper basins(ooow arh). Mind you, I can’t tell you about the cubicles as I didn’t make use, but I saw enough to be impressed!!! Well nuff said about that me thinks, back onto the planes…..

So what did we see? …. A big noisy one, a yellow one, a really pretty coloured fast one, a pretty little thing that was used throughout ww2- the elliptical winged one- oh darn it, what is it called !!! Hehe, don’t worry I know a little more about planes than that! Not much more mind you, so I apologise in advance as you might find this annoying
a)      if you are not a fan of aircraft, and
b)      if you are a fan of aircraft- you will cringe at how basic my knowledge is!
To be honest I don’t marvel at the engineering side of the craft- well I do, as it does hold a little interest within me- what I mean is when it gets too technical I switch off. I judge an aircraft purely buy its appearance (I’m such a girl), how it can be manoeuvred, if it makes a pleasing noise or not (I'm mad), and what connection it has to history and to certain people (mainly the dashing RAF pilots of ww2 or the extremely glamorous ATA girls! Not forgetting the groundcrew and the guys and gals who built and maintained them!) Usually if I enjoy watching it,  and it makes my hairs stand up on the back of my neck or makes me a little teary- it’s a good’un!

So to the pictures I took or in some cases I didn't take... if only they would stop for me to take a decent picture!!!

... the same dude (hehe) who designed  the Hawker Hurricane-'the backbone of the Battle of Britain'. (Don’t thump me spitfire fanciers.) It says in the program that he also designed the Hawker Typhoon, Hawker Tempest, and the Hawker Sea Fury- to name but a few- a right clever little Mr, wasn't he! 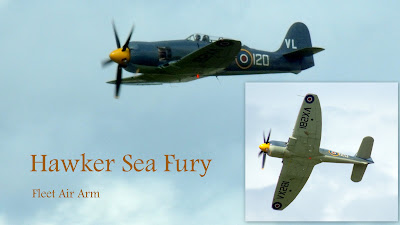 
... the Gloster Meteor (the first British Jet Fighter) entered service with the RAF in June 1944 and was used to intercept the unmanned German jet missiles- the V-1 flying bombs﻿.  It was later used for ground attack and armed reconnaissance. This one is a Armstrong-Whitworth Night Fighter 11- flight tests started in 1949.
This was probably Grandpa pa's favourite aircraft of the show as he worked on it when he worked for the Gloster Aircraft company. I'm not sure what he did- I will have to ask- maybe it's a future post!
And last but by no means least....
The VULCAN
﻿﻿﻿﻿﻿﻿﻿


Righty-ho, I fear you may have given up on me by now- sorry. :(
Obviously there were others too but even I’m getting fed up now with putting in the pictures- grrr.

I shall endeavour to return with something pretty and vintage very soon.-Maybe a picture or two of my new knitteds? A Mystic Mug, or even some of mine and Ma's 'Tickety Boo' finds? Decisions, Decisions!

Many happy returns for the day Prince Philip! Just a little something in my collection- isn’t it fabulous! I have decided he will be placed near my nautical themed cocktail cabinet/area ( I know, it sounds cracking doesn’t it!) when I have one. In the meantime he lives at the end on my bed, hanging from one of my hatboxes.

Oh, and while we are on the subject of birthdays, mine was two weeks ago and I got a super bunch of pressies, and I just had to show some of them off. I certainly had a varied selection, with emphasis on books - but then, one can never have too many books and the fact that I say that practically about everything (especially hats and shoes) doesn't matter one bit as it's quite, quite true!

I was also given a bottle of my perfume  and a wonderful card from my Sis (thank you niffer), and a truly scrumptious blouse from my mummy- but you will have to wait for that as the buttons need sewing on and it deserves a post of it's very own. All I shall say is...' Made in Austria' (excited?) well I am and I've seen it- for me it's a blouse of dreams.