The Spirit of Christmas Past.

Oops! Looks like Christmas totally passed this old blog by! I feel thoroughly ashamed of myself, yet at the same time feel that the result of my lack of posting left me a lot less stressed than previous years!

Christmas does not agree with me. I have so many ideas of things to do, but when the time comes all my enthusiasm dwindles and I’m left well and truly down in the dumps…. as well as extremely exhausted!

I did however feel chipper enough to make both my Grannies and my own Christmas cake, Christmas cards, a few presents (at the last second- nothing new there!) and a few Christmas decorations- nothing too fancy though!

Of course Mr. S. Clause found time to visit the Tickety Boo household on Christmas Eve (Hurrah!) and on Christmas day all my gifts were opened with much excitement (even if they were opened at some abnormal time in the morning!) You must hand it to the chap- he certainly knows what this girl likes… though you can’t give him all the credit- I have an inkling that Santa’s little helpers do most of the leg work!

I have quite a selection of goodies to show you, so I shall start with the dinky items! My jewels…..

I've just done a preview and it looks like it's the 31'st today! Blimey! I was rather hoping to cling on to this year for a little longer but it looks like the New Year is nigh. AHHHHHHHHHHHHHH.

…. Or patchwork that sends you potty!

Last month, I started a new project (actually I started it on the first of the month if you’re interested!). A project that incorporated something totally alien to me…. Patchwork! Bet you couldn’t guess from the title eh!
I decided upon making a cushion cover as it was relatively small, and its something that is much needed - mine are rather dull and flat looking!
It took me four days in total to complete all the hand sewing, and blimey did my poor fingers pay for it! I’ve never done so much hand sewing in my life and I’m not sure if I ever want to again. I probably would average at about 18-20 stitches to an inch ( I say this with crossed eyes!) It was indeed enough to send me potty. Though luckily for me I didn’t have the added hassle of cutting out all the templates or the tacking of the patches as it was already done for me. You see, I had a box full of the patches come into my care, so all I had to do was to decide on how to arrange them and get stitching! I may moan and groan about doing patchwork now, but I suppose in some odd way it was quite an enjoyable project whilst I was stitching away…. Well it must have been because I finished it pretty quick and I did very little knitting!  (I say ‘finished’, that’s a little porky, as I’m still to find a nice piece of fabric for the backing.)

So here it is! My first attempt at patchwork! 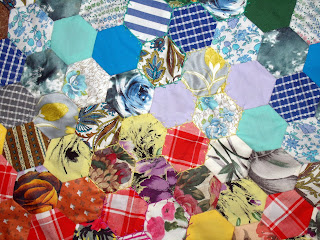 As it’s not much to look at yet I have taken some photos of a patchwork with more interest and skill involved!
It’s one of my first and favourite items in my collection, and it’s very much treasured.
I started to collect twenties clothing before I found out that it was really far too much out of my league and before I moved on to the thirties and forties (which in all fairness is becoming the same way!)
It’s certainly a piece that has seen happier times, when its jewelled silks and velvets were paraded with such gaiety and pride for the marvellous handiwork involved in making this technicolour cutie. Unfortunately it has lost its sparkle somewhat. No more to be worn with all its shattered patches, and only to be admired by all who visit my room.
This little lovely has been hanging up on my wardrobe since I purchased it. I hadn’t the heart to pack it away. Well, what’s the point? The condition is ‘knackered’ yes, but I might as well get the enjoyment of seeing it every day if I can’t wear it!
I can only imagine where this dress has been and what the original owner was like. What about all the patches? What outfits did they get cut from? Grannies wedding dress maybe, or how about the girls first party dress!  Oh, what it would mean to know exactly!


I have my sights on making a crazy patchwork dress or garment of sorts of my very own…..maybe when I have some nice scraps and oh yes, some patience would be handy in the sewing department too! I'll keep you posted!!!