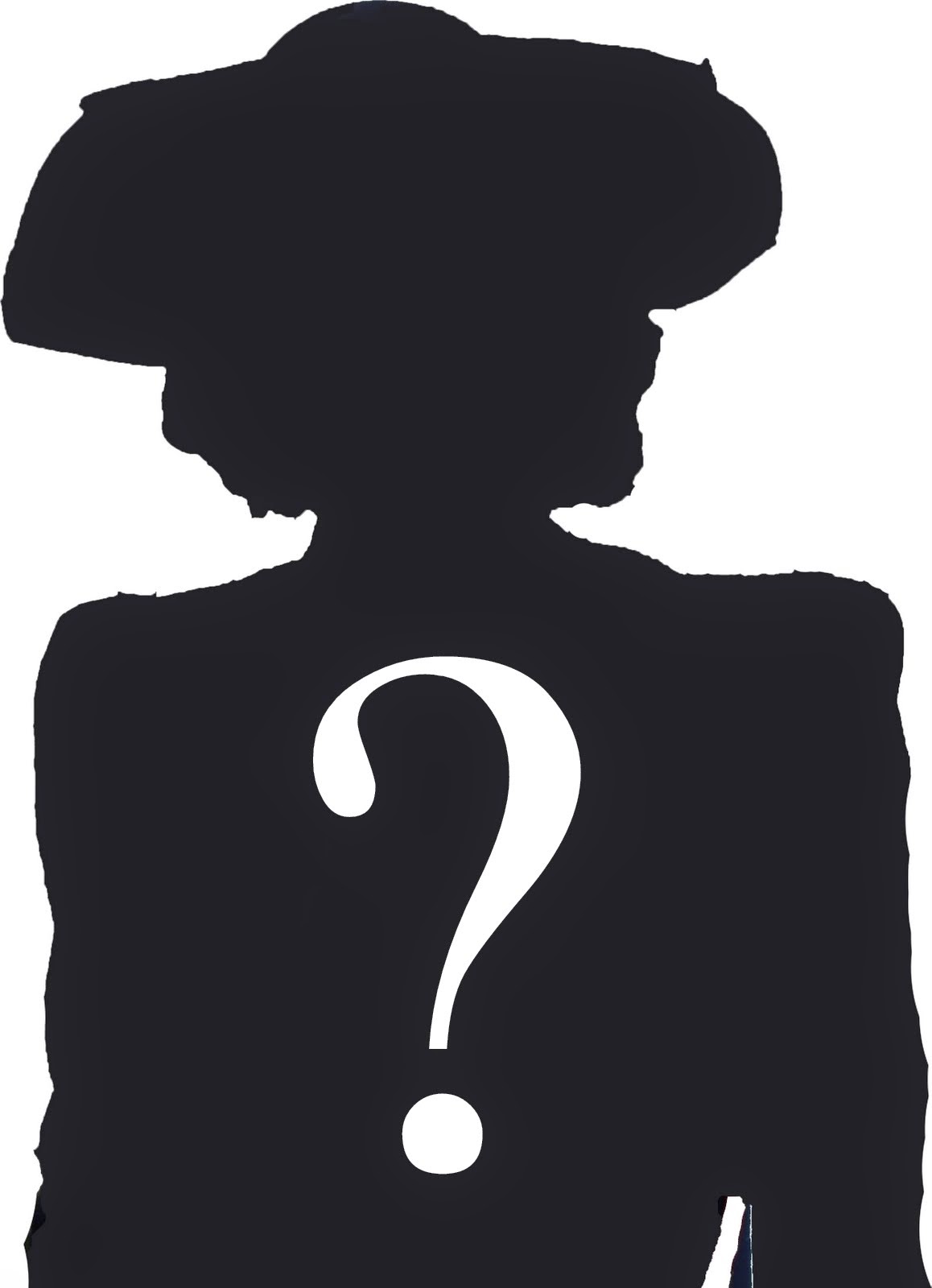 A slim undercarriage with a finely streamlined fuselage (but more hump-backed than the Spitfire), distinctive nose and an unusually large wing span....

Ok, so you don’t need to know your aircraft silhouettes here today. I’m just trying to make my new hat tie in with the RAF Friday theme, and thought a few silhouettes of some dashing aircraft would do the trick!

Buy a new hat, bung on a coat with the best 'silhouette' in the world (See what I did there ;)...oh the shoulders are the absolute tops); then add a few dodgy cut-outs of a Spit, Hurricane, Blenheim, and a Mosquito or two and what do you have? Why a RAF Friday blog, silly! 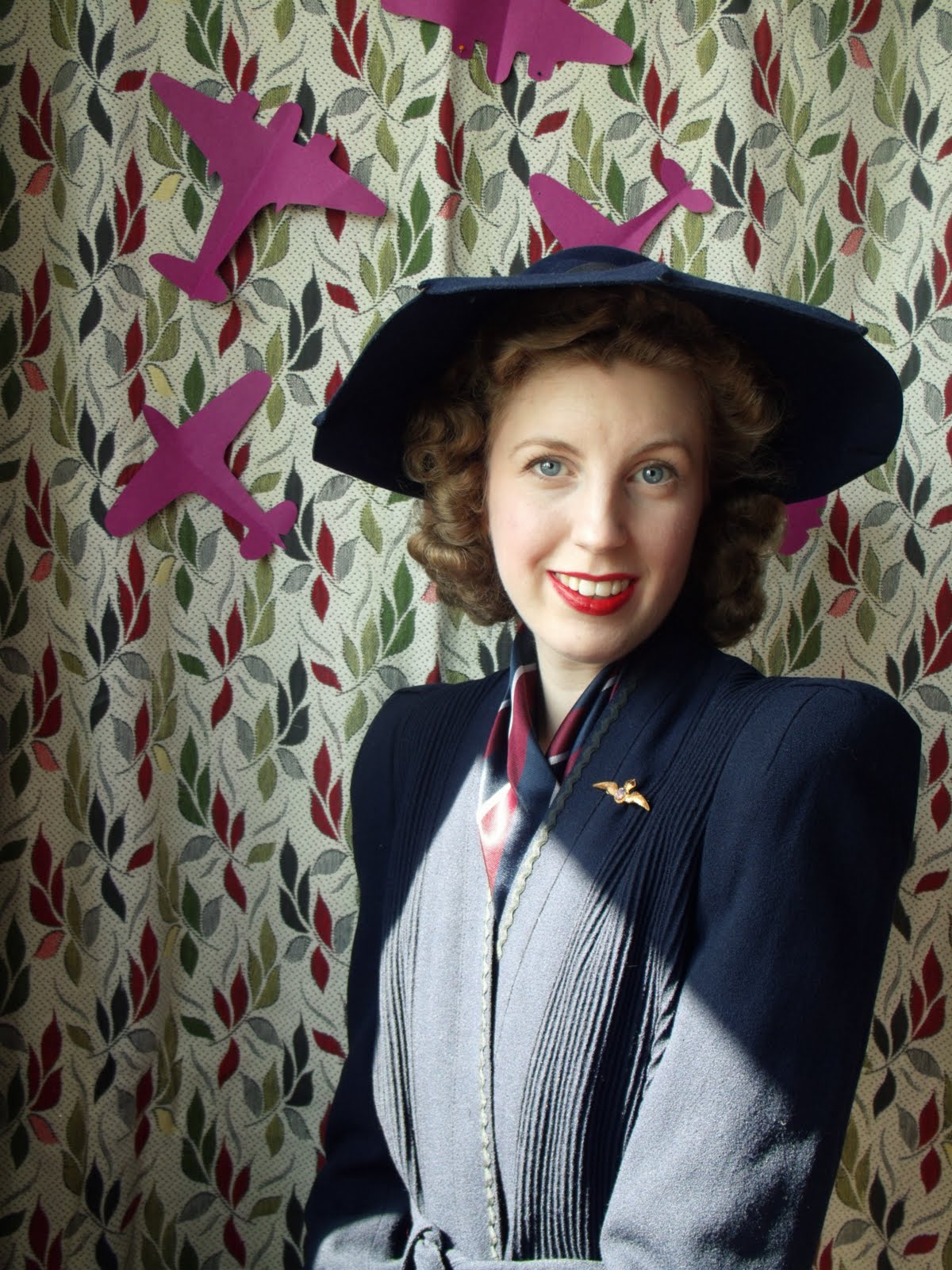 Sickly sweet or what! Even I want to slap myself in this picture!

As most of you know, I do rather like a nice hat or two (or four or five) and my groaning hat boxes are a testament to that. I need another hat like I need a hole in the head. But when a titfer speaks to me so joyously, how can one resist? It would be rude to ignore it!

I can’t help it. I ADORE hats! 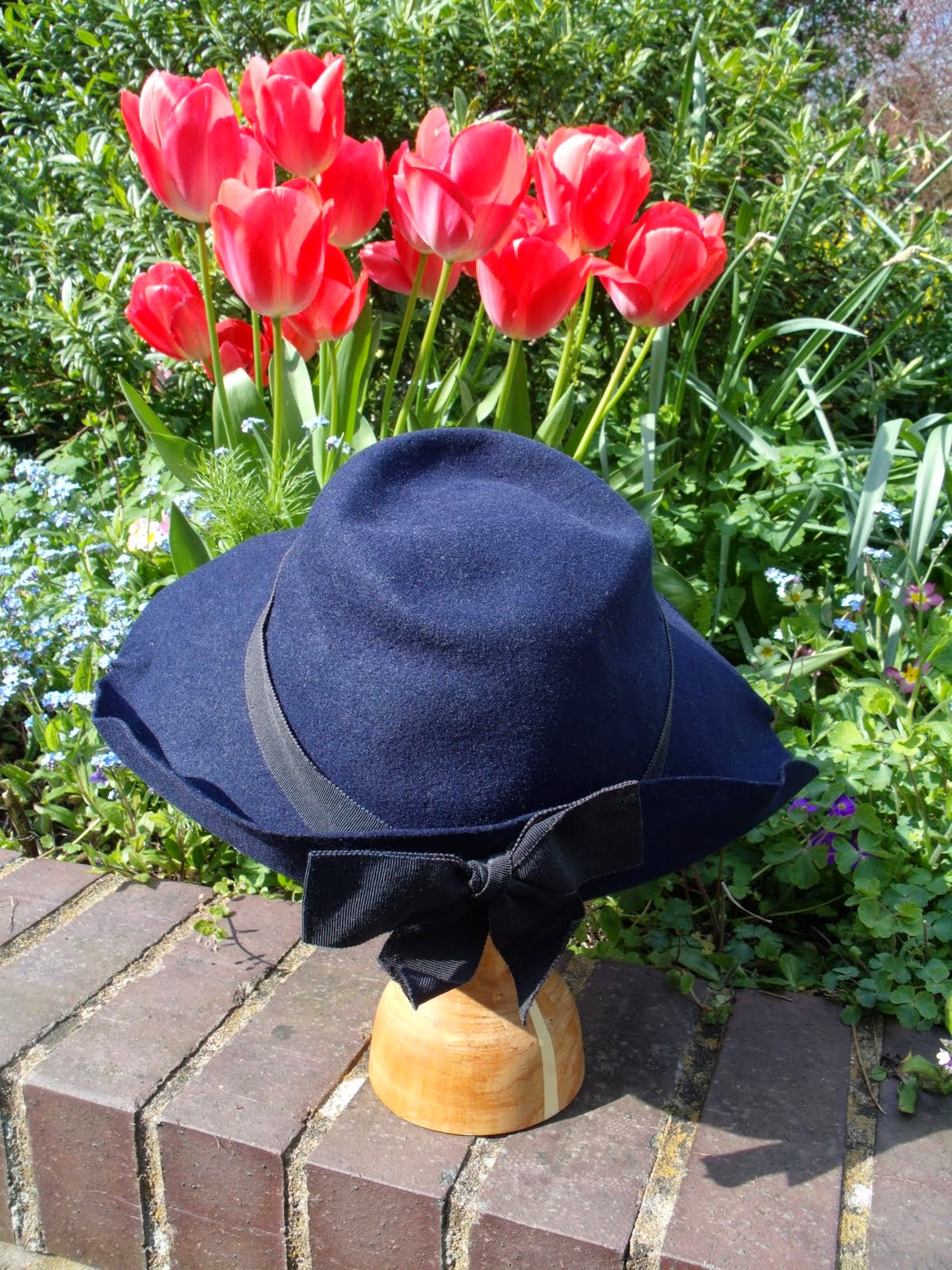 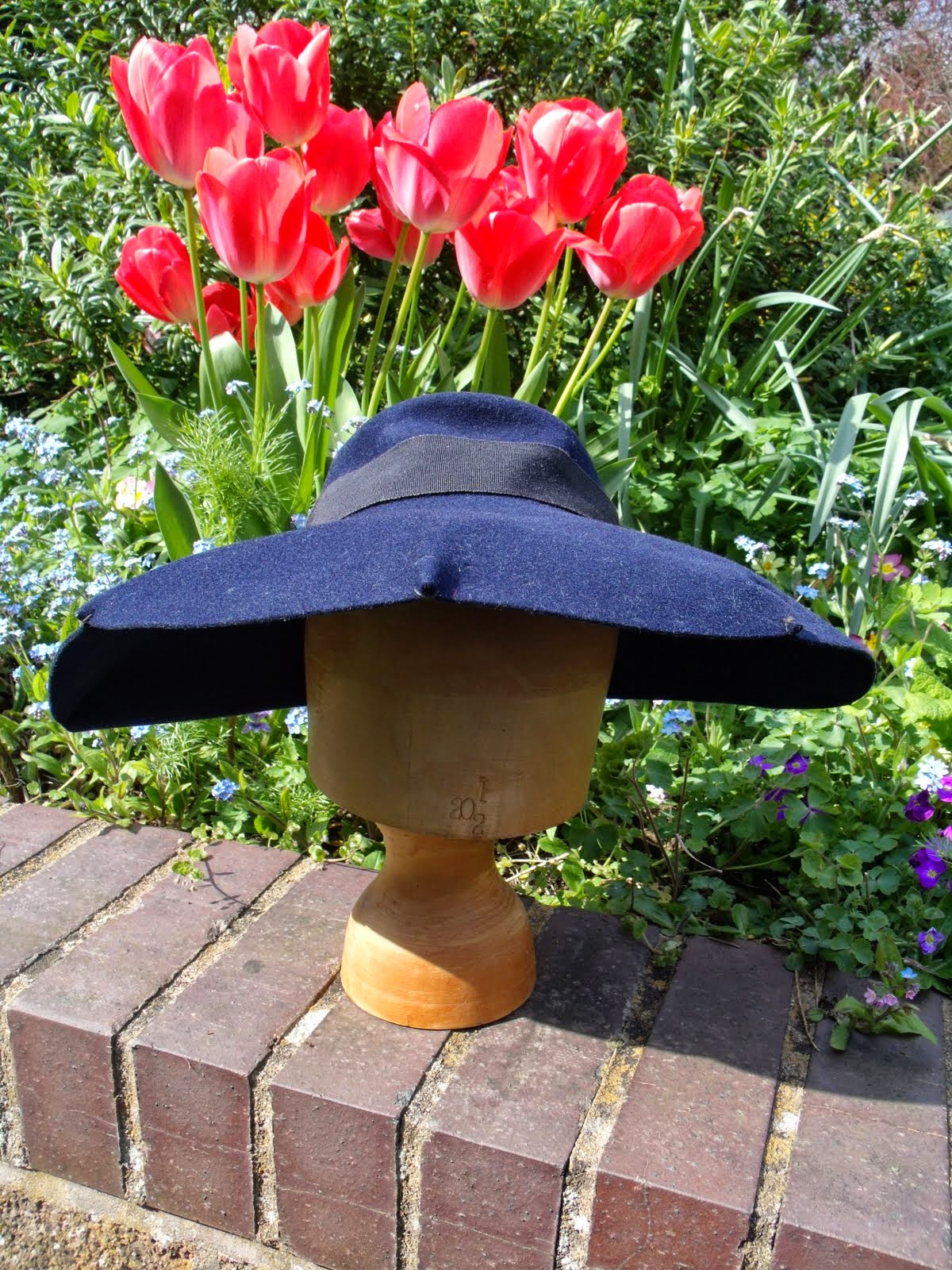 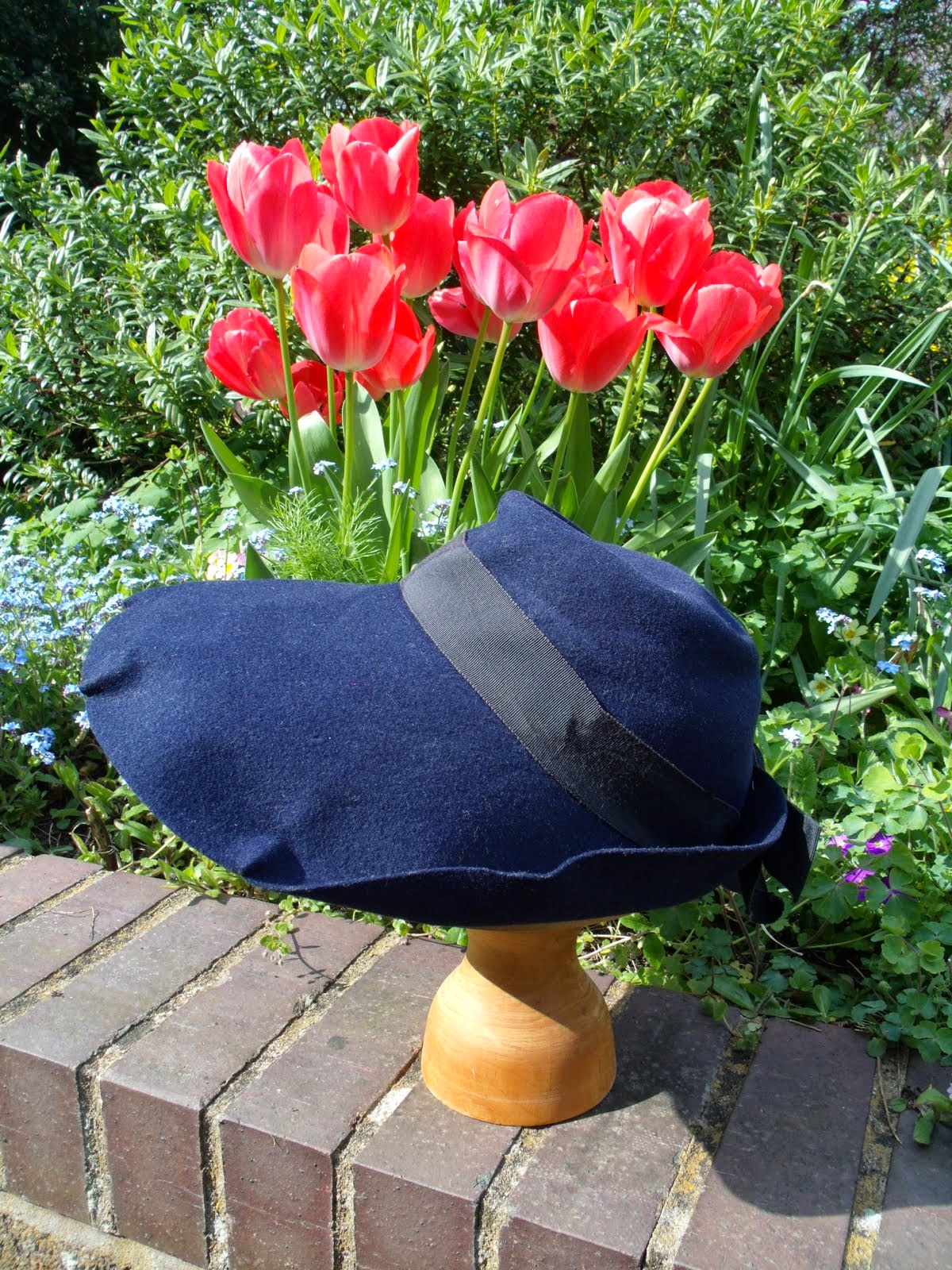 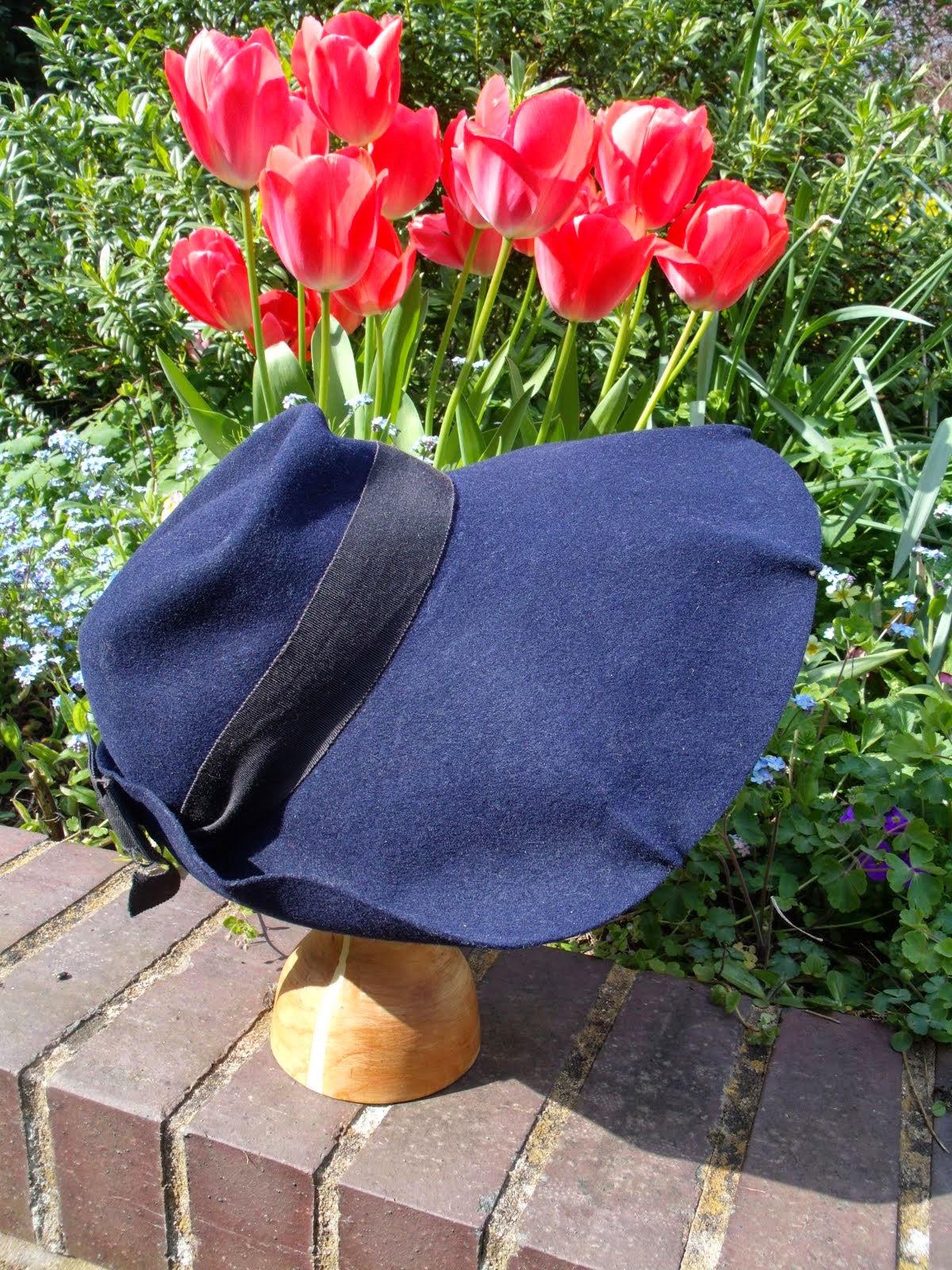 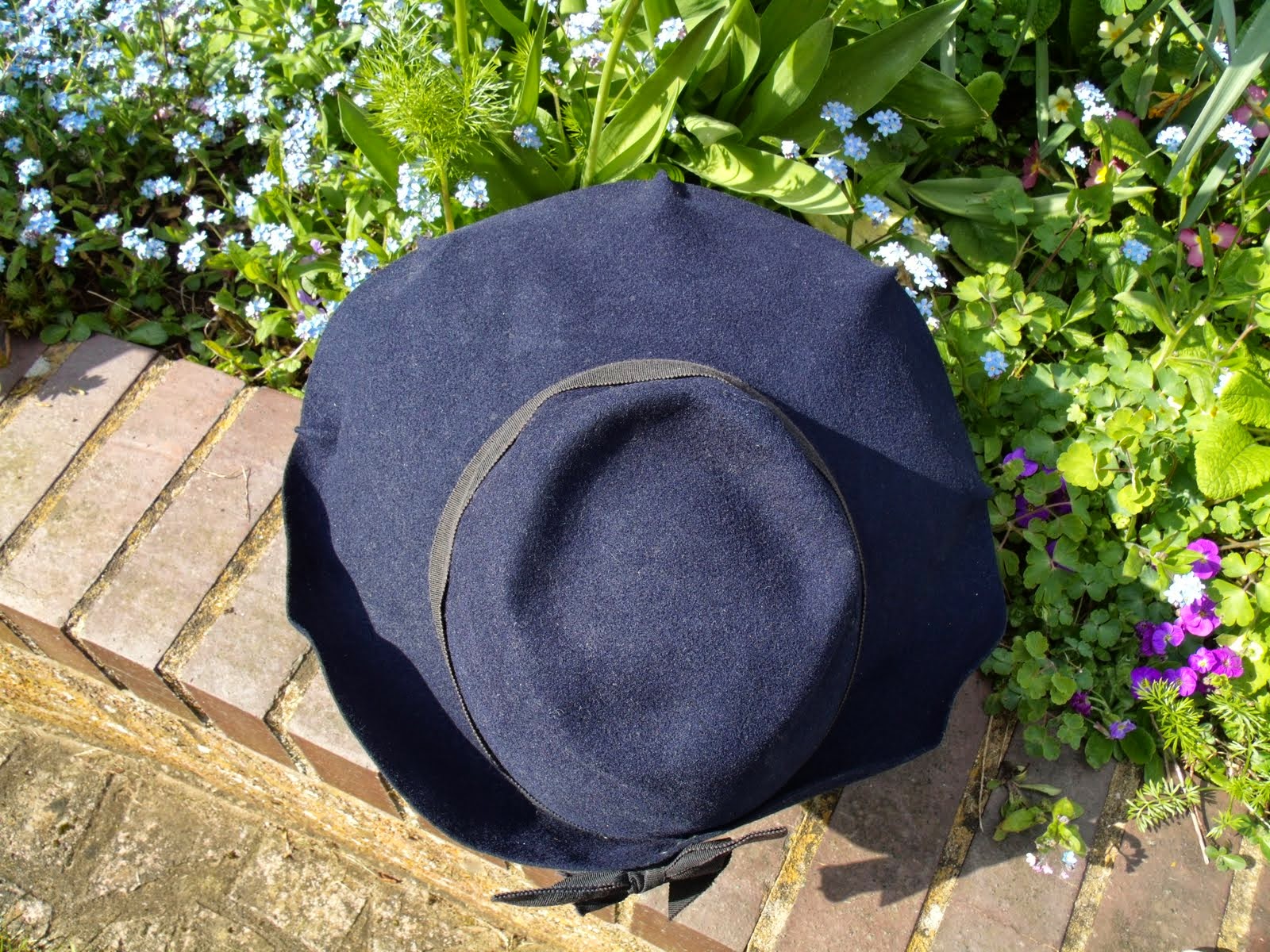 It’s actually a bit of a dream hat. For what seems like forever (ok, only eight or nine years!) I have had an image stuck in my head.  The image is of a lady grocery shopping, wearing a large brimmed hat and a fab coat made out of a candlewick bedspread. I wanted this outfit. I wanted that hat! Well, now I have both. :) (more about the coat later…)
But for now I will just leave you with a million pictures of me wearing my new hat... all frightfully similar, of course!
♥ ♥ ♥ 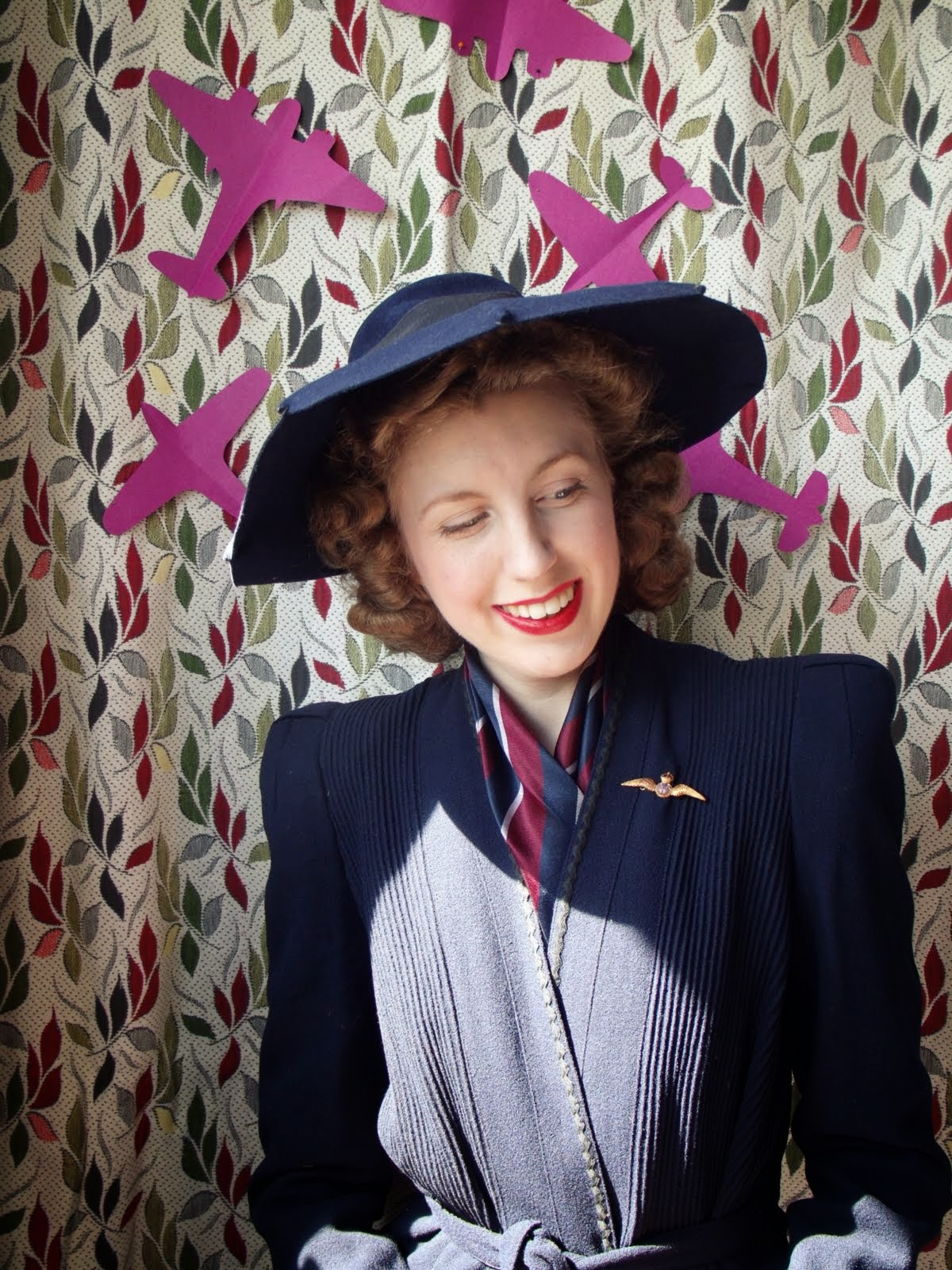 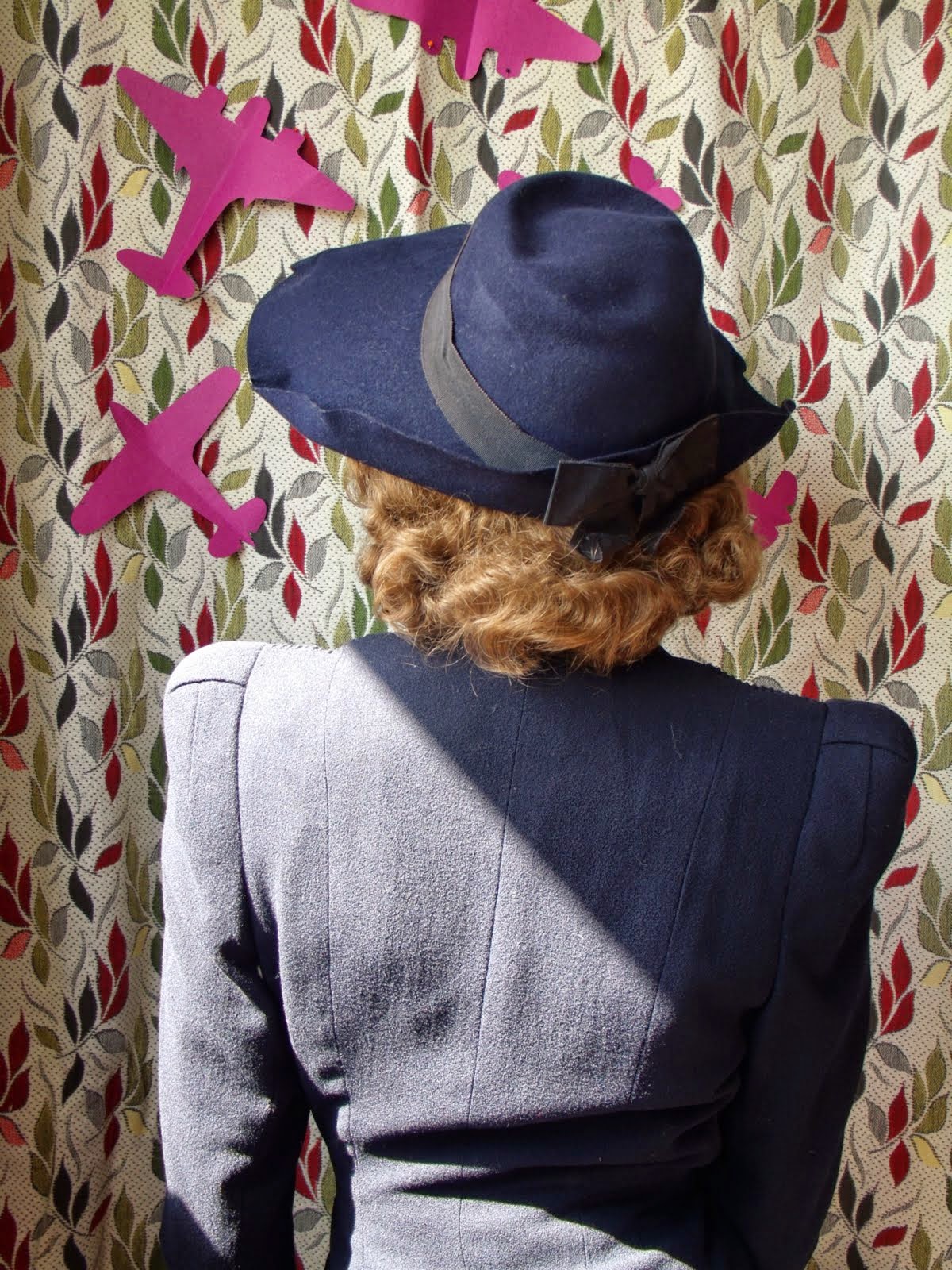 Gosh, I've never seen this coat from the back- looks rather lovely. 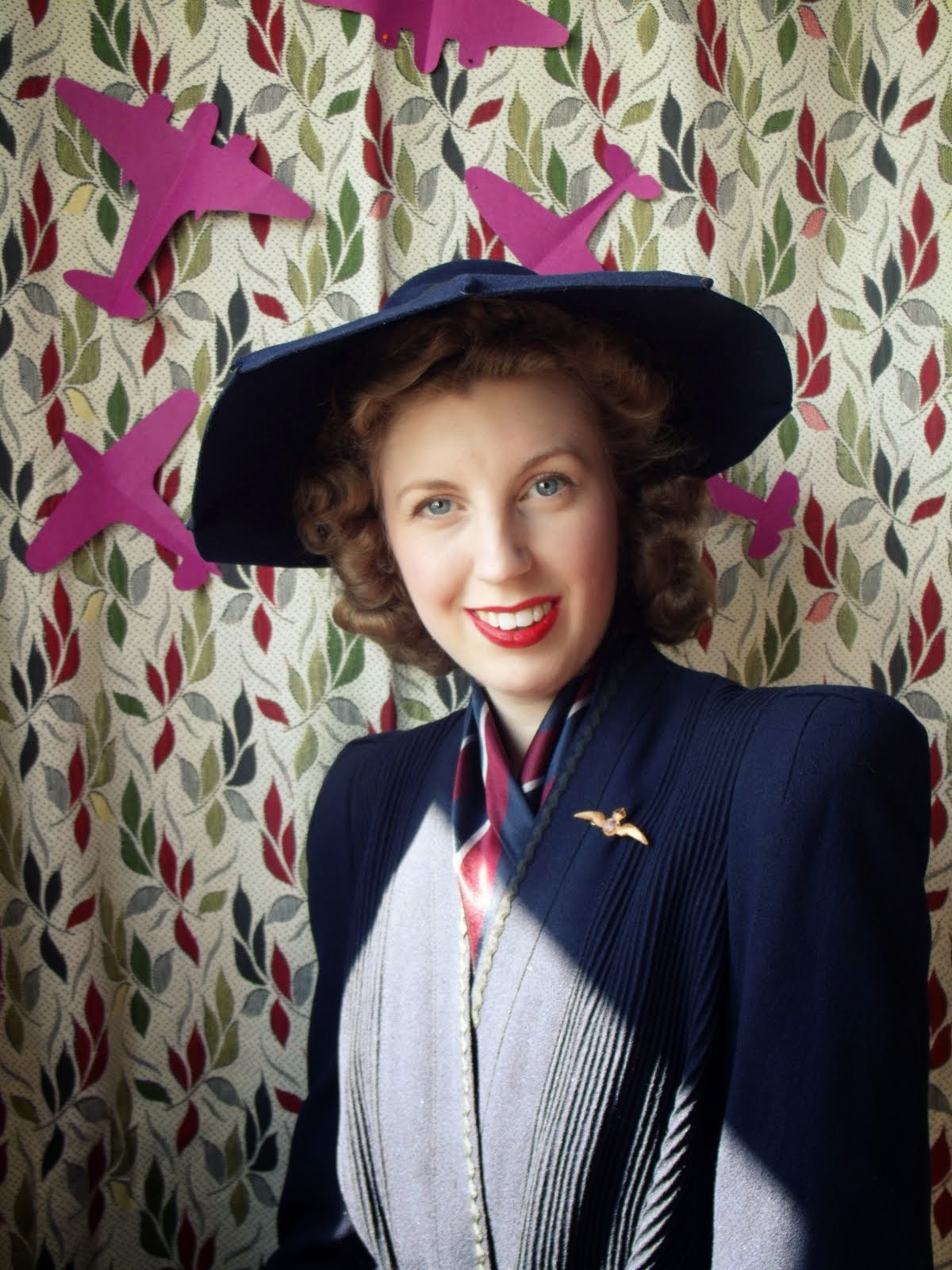 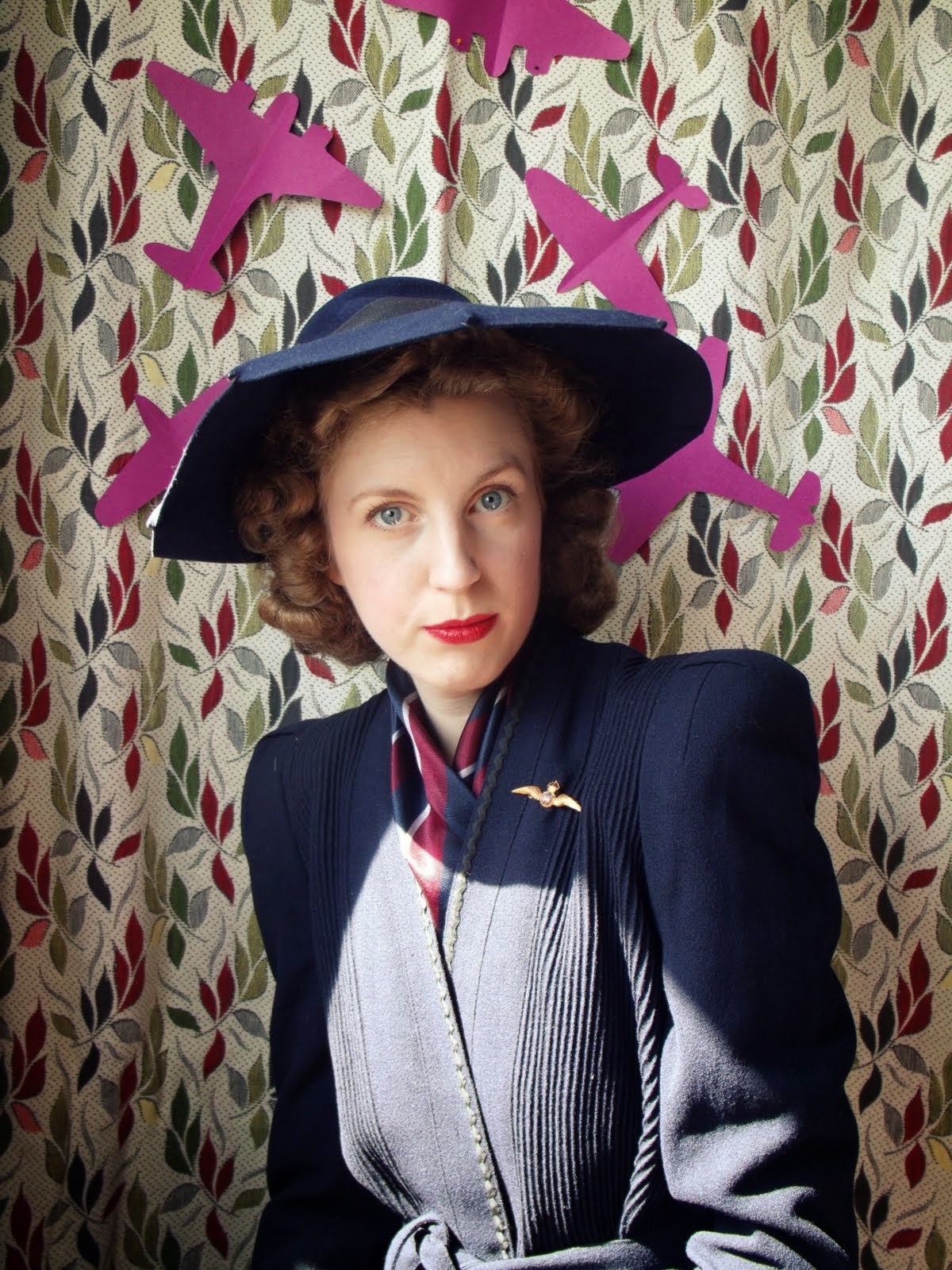 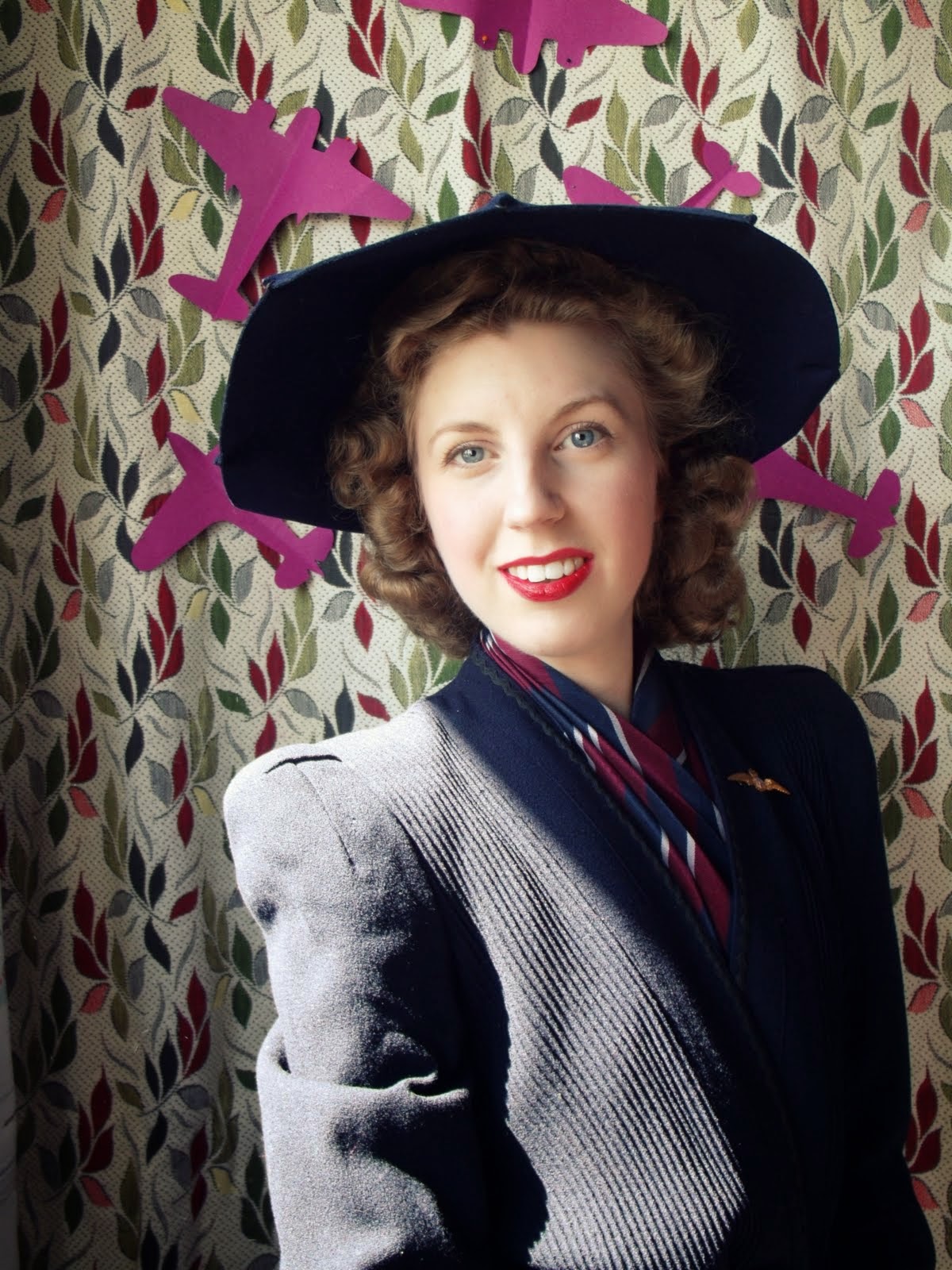 The picture on the right makes me laugh. It looks like I've been wheeled into the picture- so awkward! 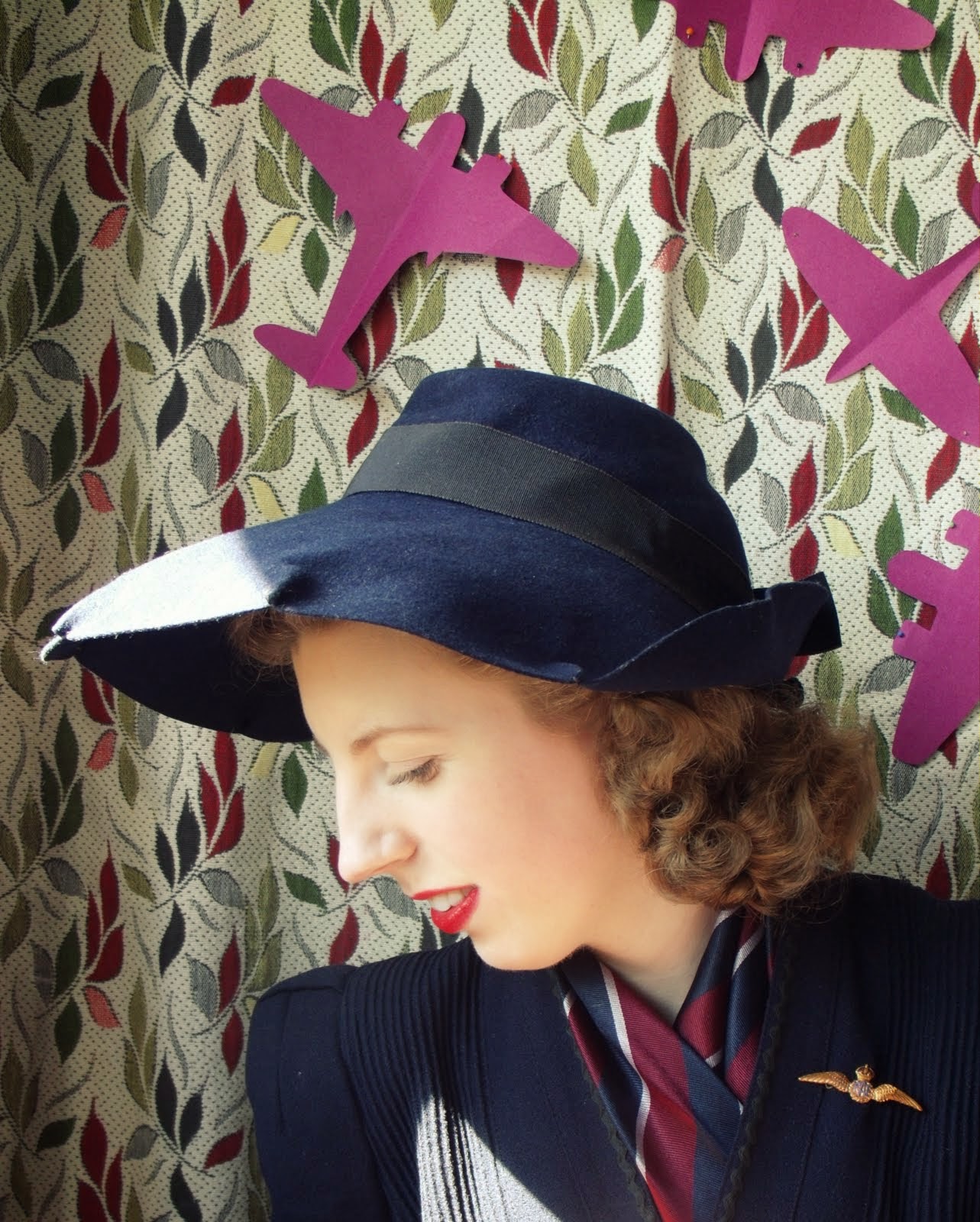 A hat of navy blue,

with wings upon my heart.

Now all I need is an airman to say I do…  think your new hat is rather Tickety Boo!
Here's to the next time.
Have a cracking weekend,
Your Tupney x 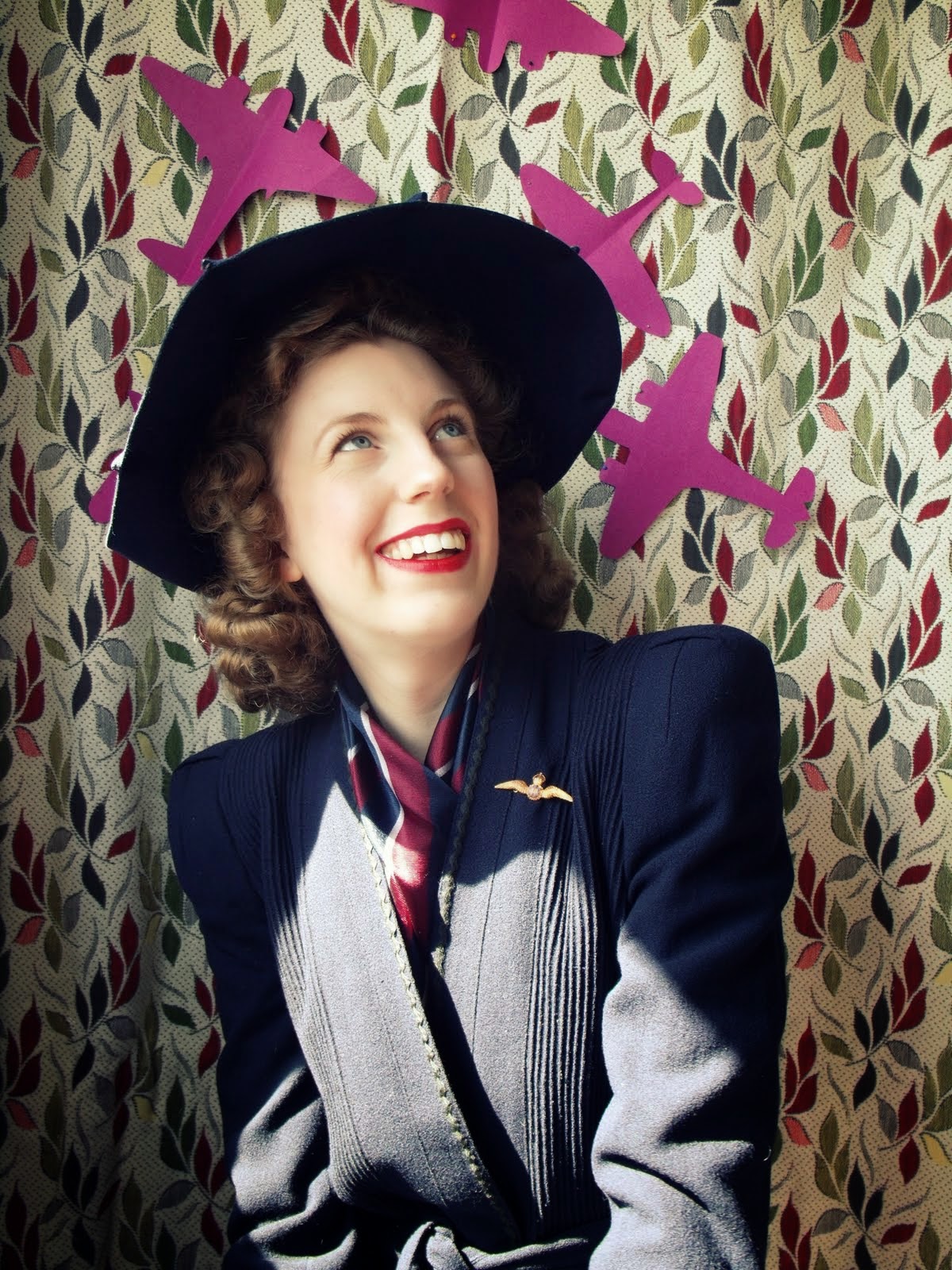 And this last one is for my Mammy, just because she likes it!
♥ ♥ ♥
***﻿
RAF Fridays so far...
Oh no! Not another RAF Friday!
Daddy’s in the R.A.F
A Hankie For A Sweetheart
Wings for Victory!
Reflection of a Sweetheart.
A Flying Visit!
A Lucky Strike
Two Airmen and a Camel.
The Real Deal
The Apprentice and the Sweetheart.
R.A.F. Friday Christmas Special
R.A.F War Pictures
Nothing but Patches
It's a Piece of Cake
Mrs Pickup's
Knitting for the R.A.F
Love Is In The Air
Double Trouble
One Mans Photo's
The Rings
Here Comes The Bride...
The Other Box
The Box
Mayday! Mayday! She has bought more wings... 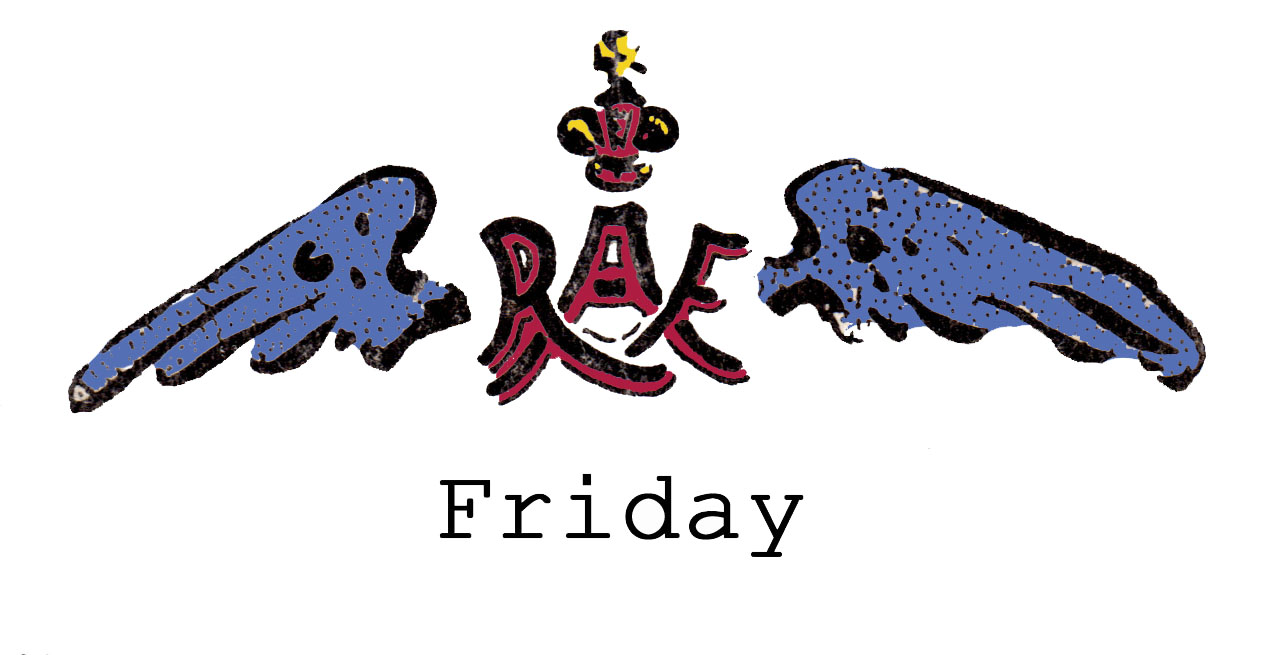 Hullo All!
I can finally announce my Sew for Victory projects- hurrah!
It took me a while to decide on the 'prefect' project because somehow I managed to lose all my 'good ideas'. Actually, it put me out quite a bit as I'm never without inspiration- I always have far too much, so to have none at all was a bit distressing to say the least. For a couple of weeks I knew what it was like to not be creative.... and I can tell you I absolutely hated it! 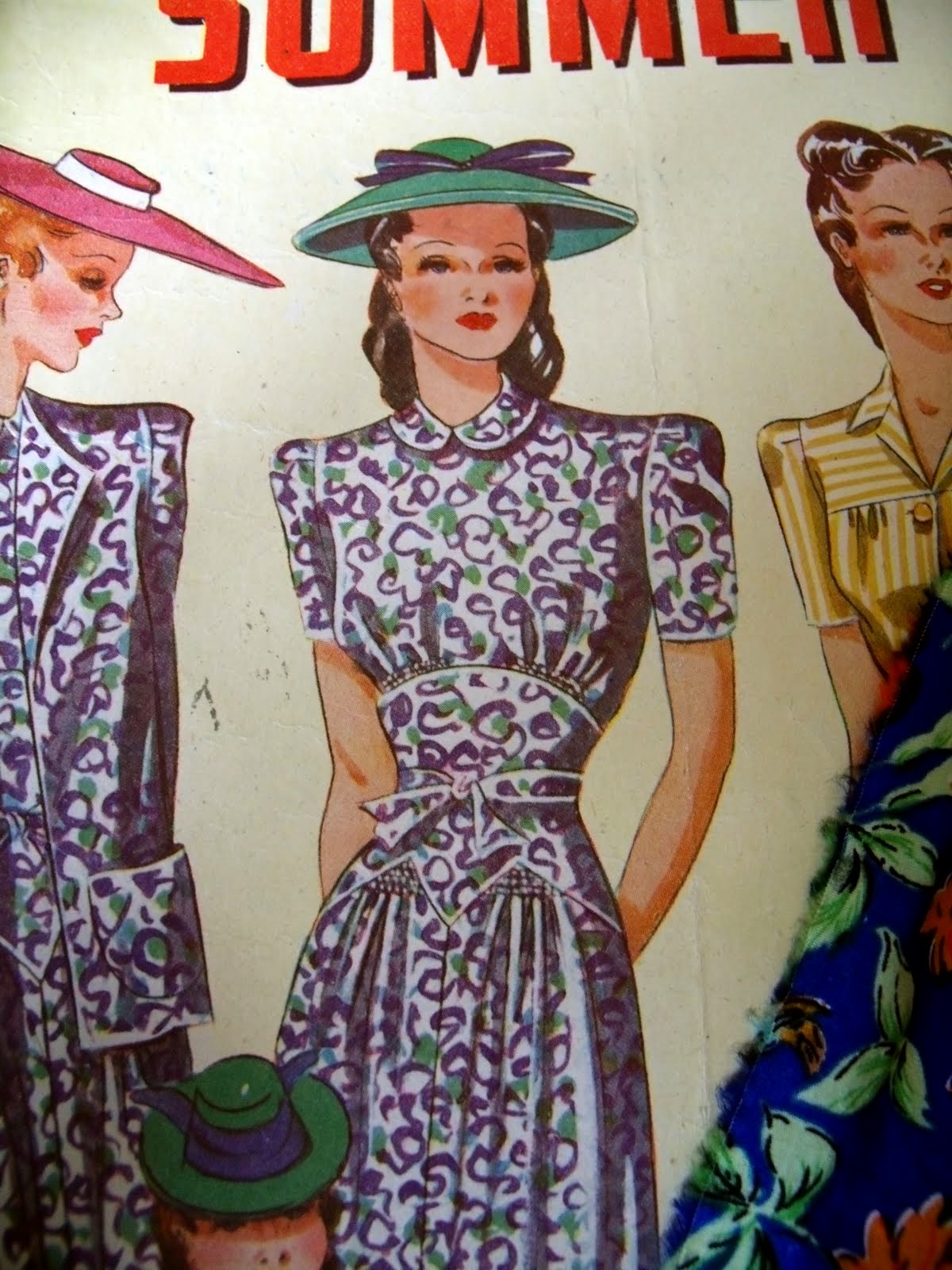 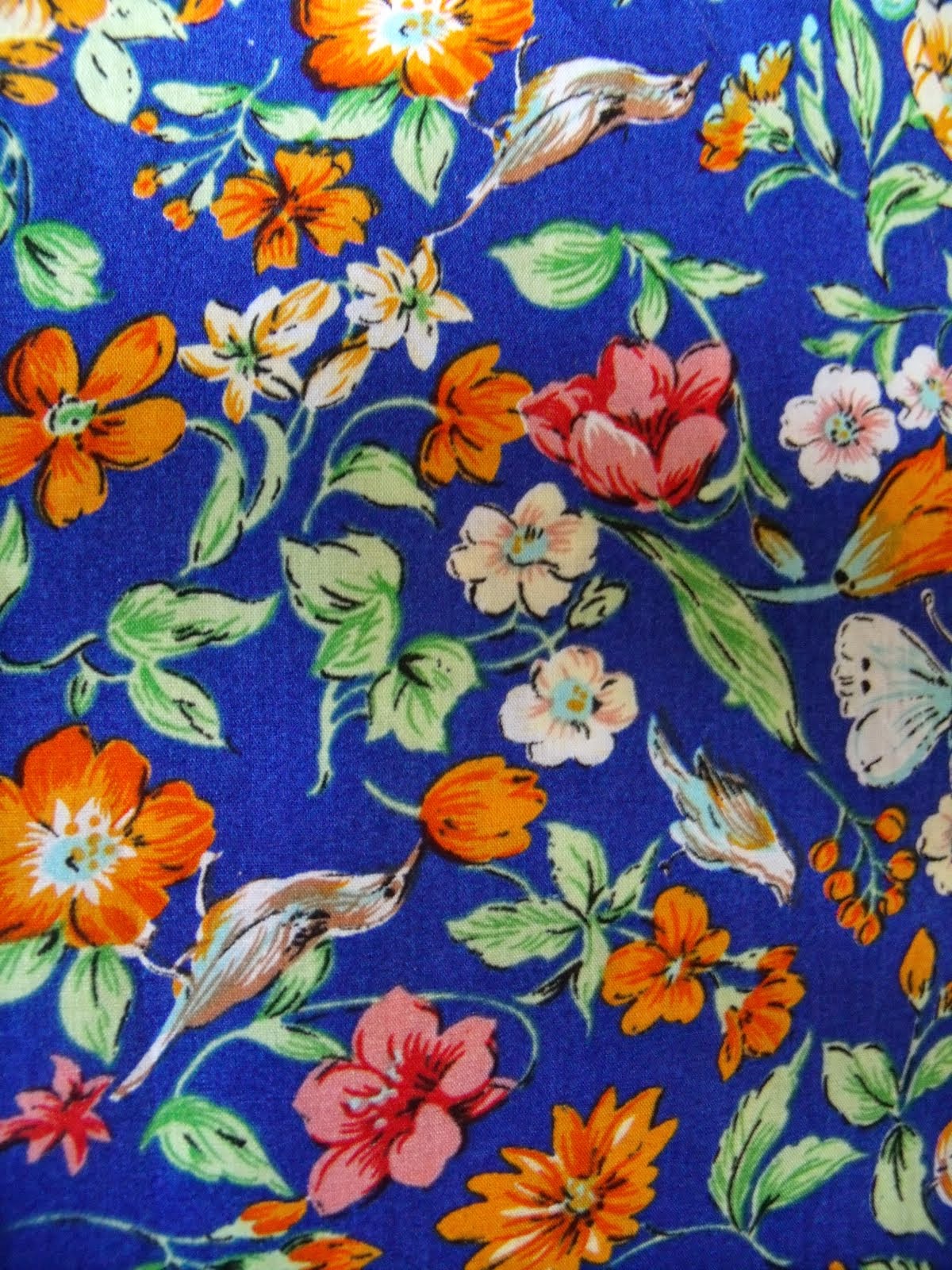 The pattern I have chosen is a " gulpy, gulp - can I do it ? " pattern, and one I originally thought Mammy would be making up for me instead (for obvious reasons- just look at the picture below!). It was chosen in desperation as nothing else looked tempting at the time. The pattern beguiled me when I was at a low, and now I’m well and truly trapped into making it. I’m doomed, with no chance of release until completion! A bit dramatic? Well, if you knew of the trouble it has caused, even before starting to sew the darn pattern, you would think otherwise. To put it simply, the bodice just didn’t fit. So Mammy, the magic sewing fairy, worked wonders on the pattern by doing all sorts and now I have a usable pattern- three cheers for Mammy!
The fabric I have chosen is from the stash, and had been earmarked for this dress for some time. I just hope that the blue doesn't drain what little colour I have!
﻿ 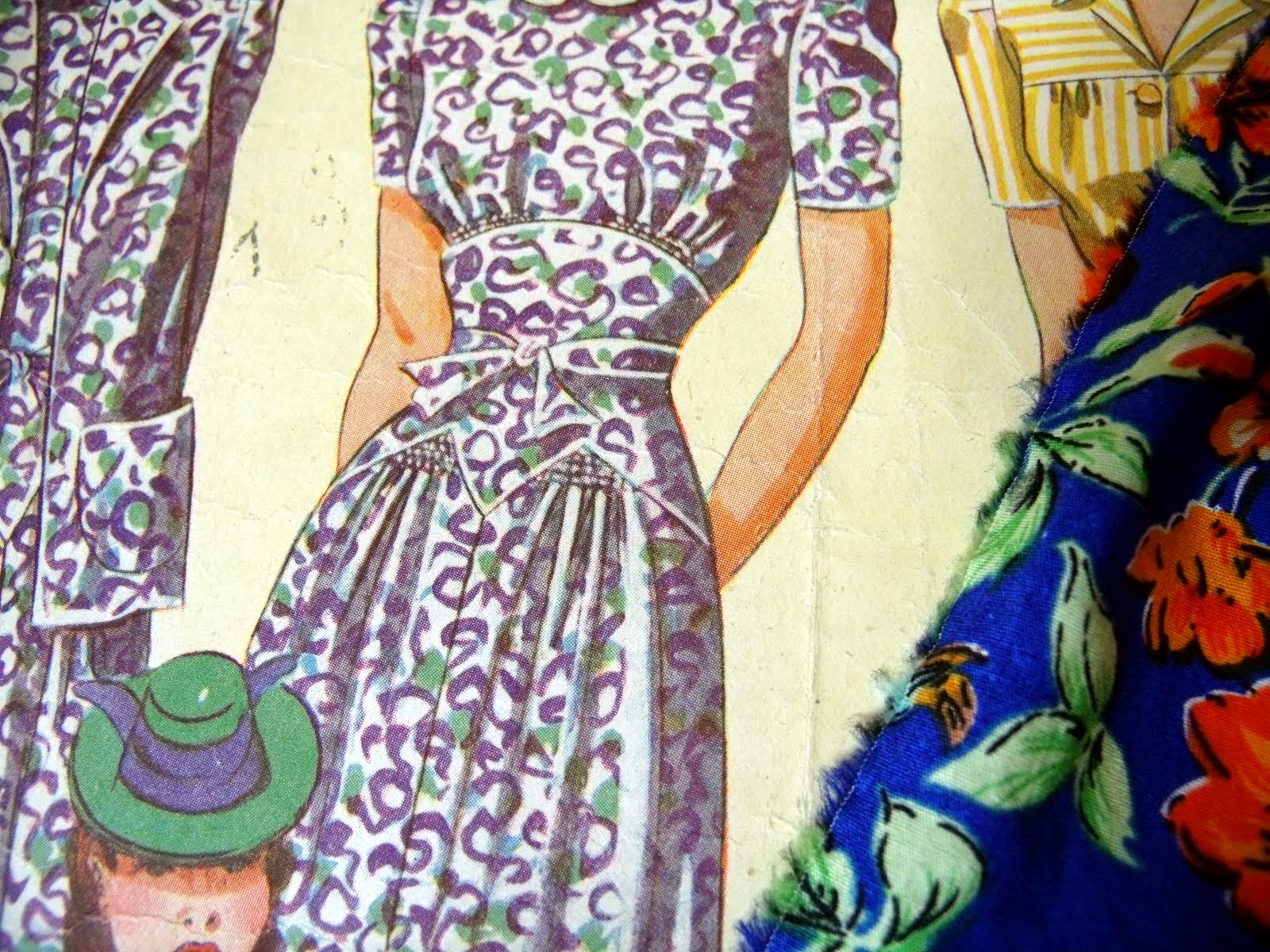 Oooh, such pretty details!  I'm really not looking forward to all that top stitching- eek!

I have also decided to make a pair of knick-knacks. I started work on these last week after having a 'lightbulb' moment. I'm not going to say what I'm doing, but I personally think it's genius if a little ridiculous! I'm keeping my fingers crossed that it works, and I hoping the trouble I had with the waist fitting is the only trouble I will encounter on this make! 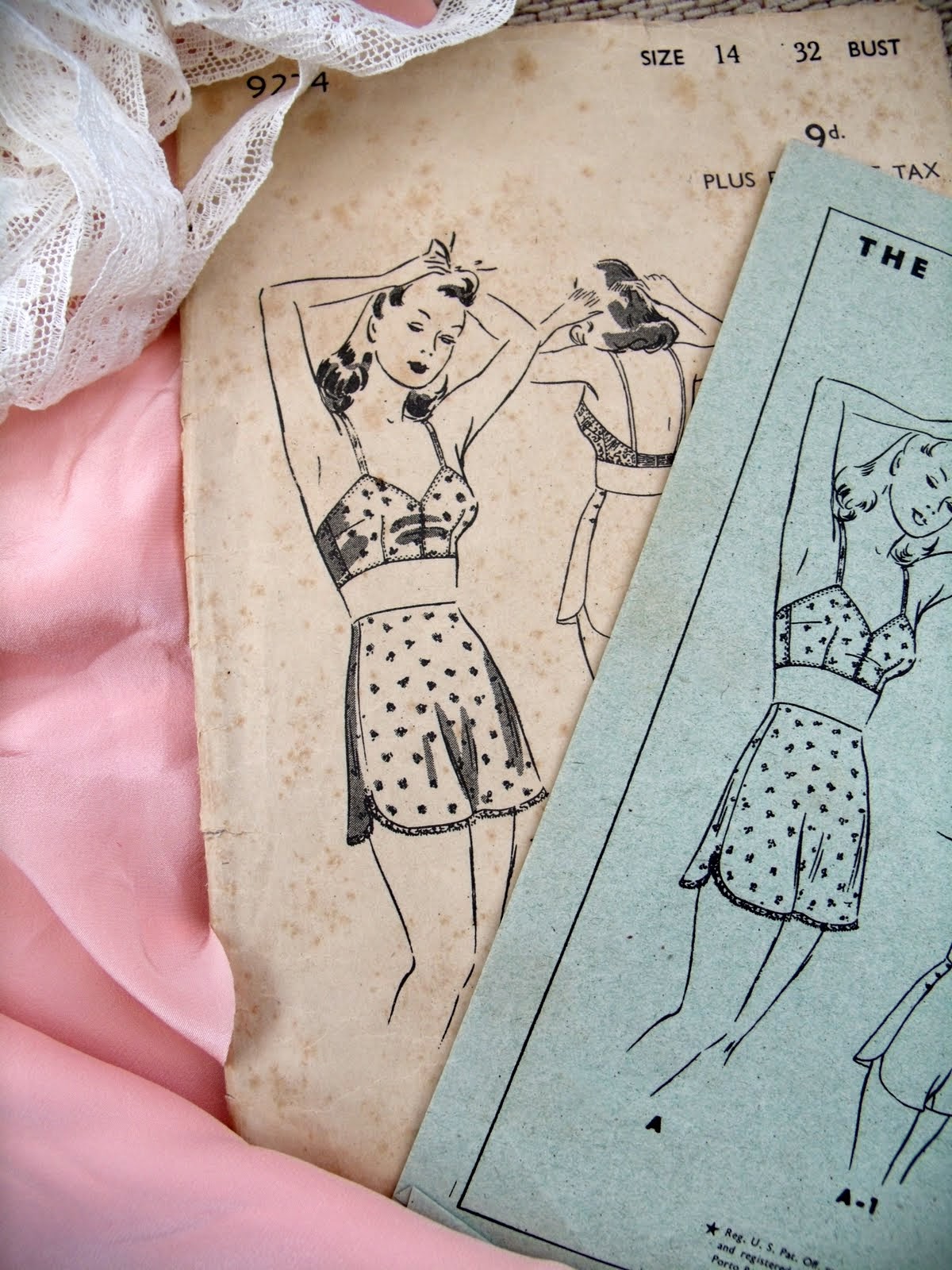 And in other news, I have started yet another knitting project...
(well I do like to have at least five unfinished projects around me!) 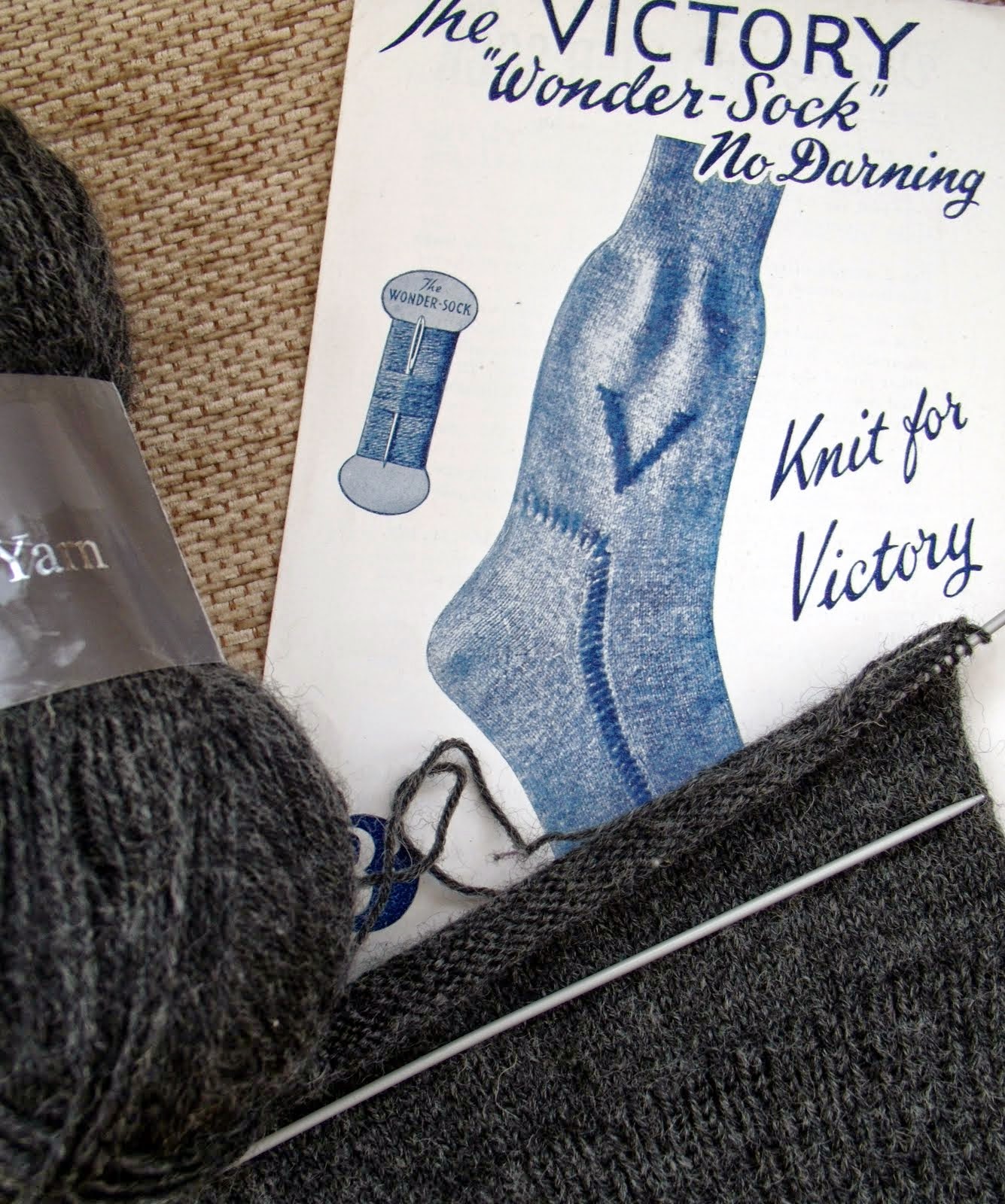 ...The rather wonderfully named " Victory 'Wonder-Sock' ".
They are going to be a real labour of love as they are knitted on teeny tiny size 14 needles- oh 'eck!
Apparently they are the perfect gift, but all a I can say is that the receiver would also have to be the perfect chap. There is no way I would knit these and give them away to just any Tom, Dick or Harry!
Oh and I nearly forgot… 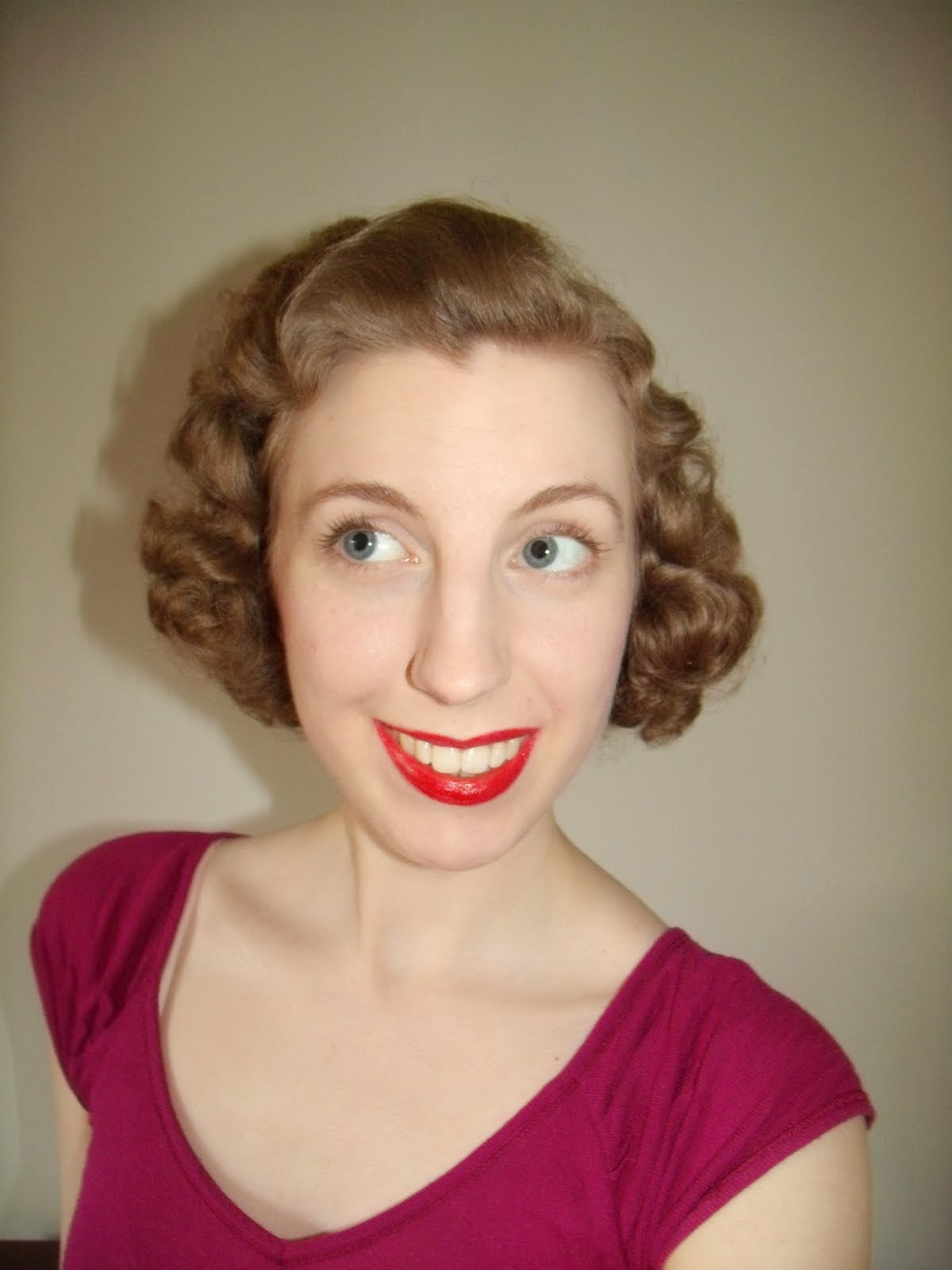 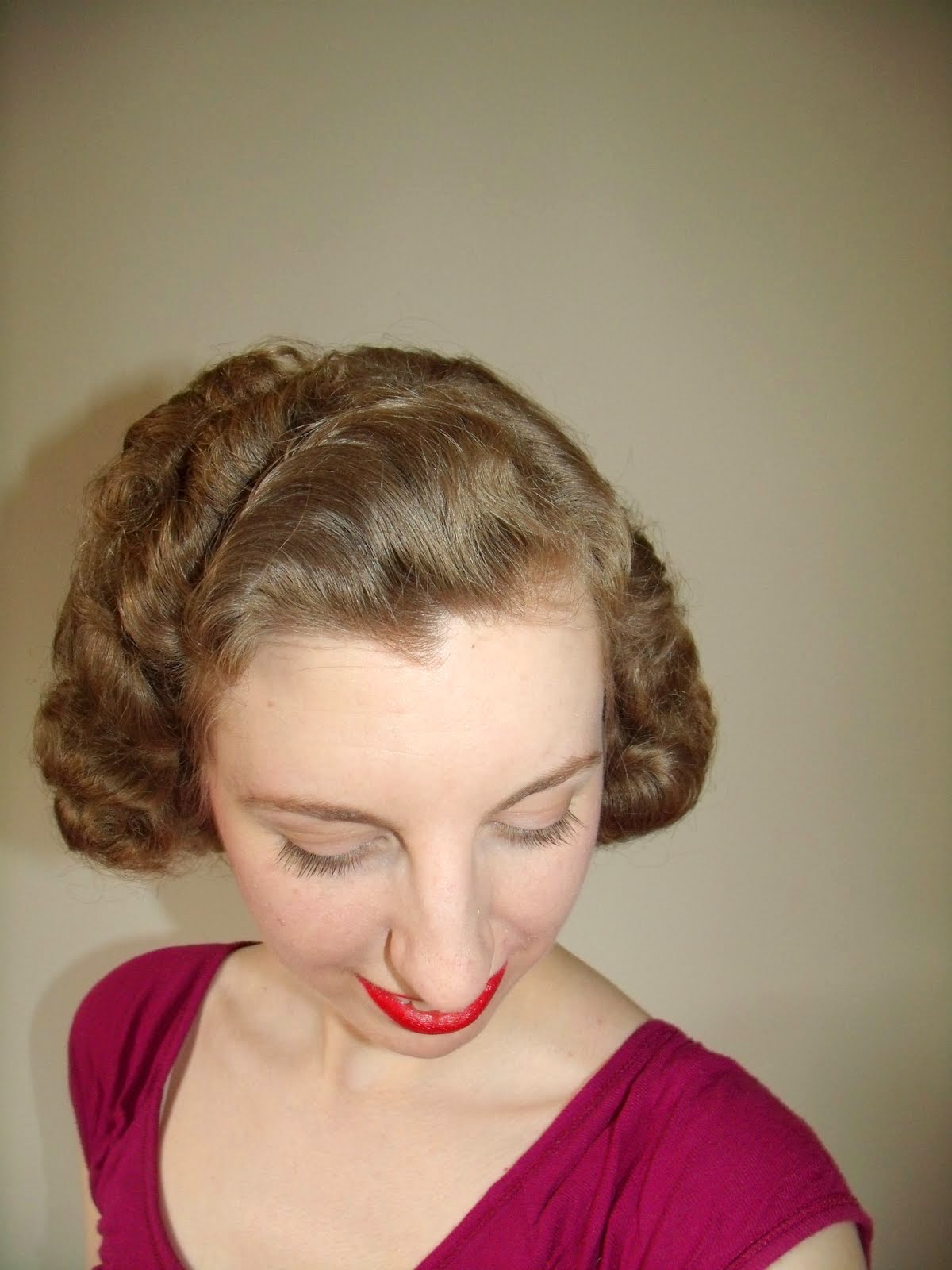 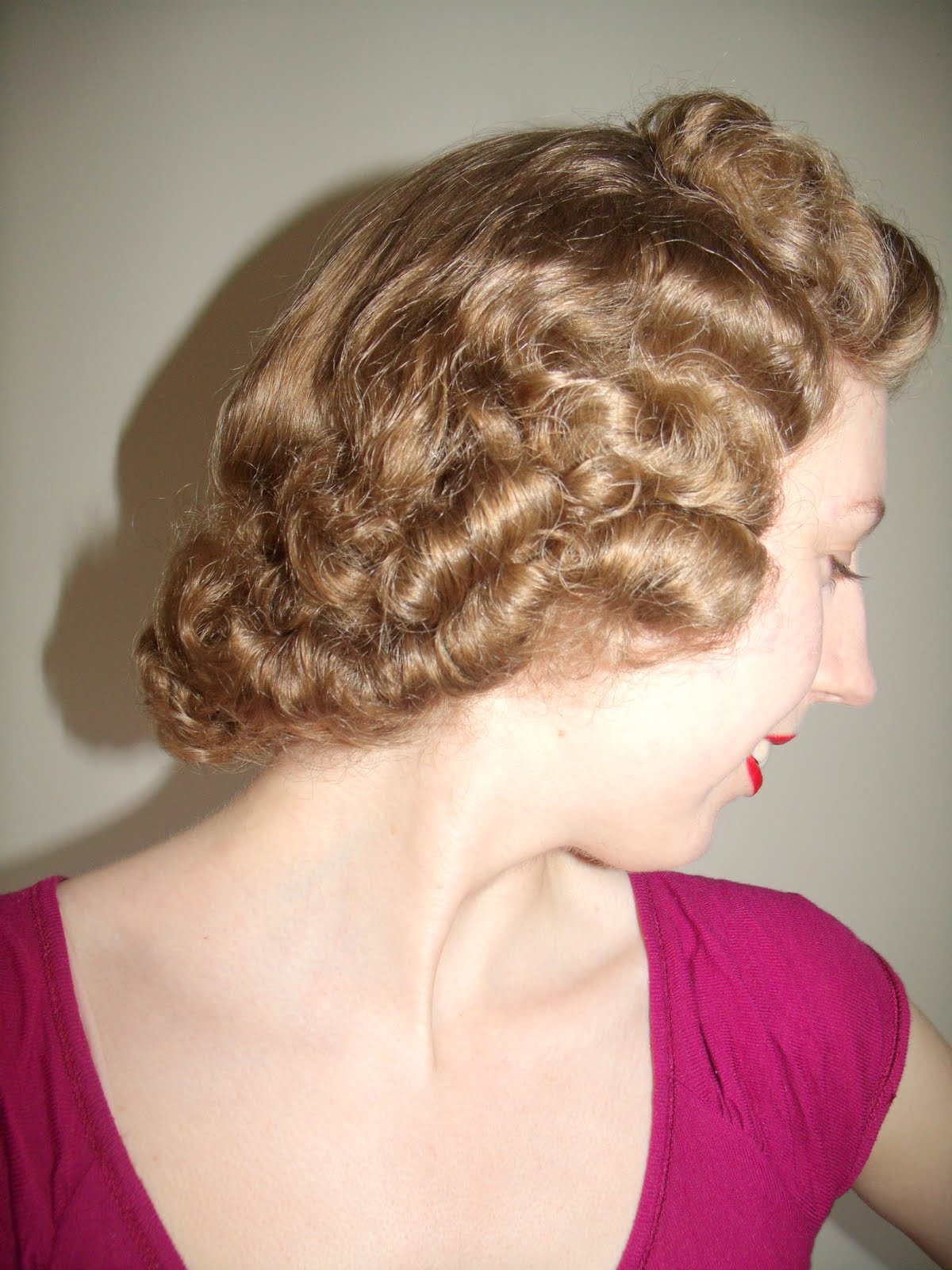 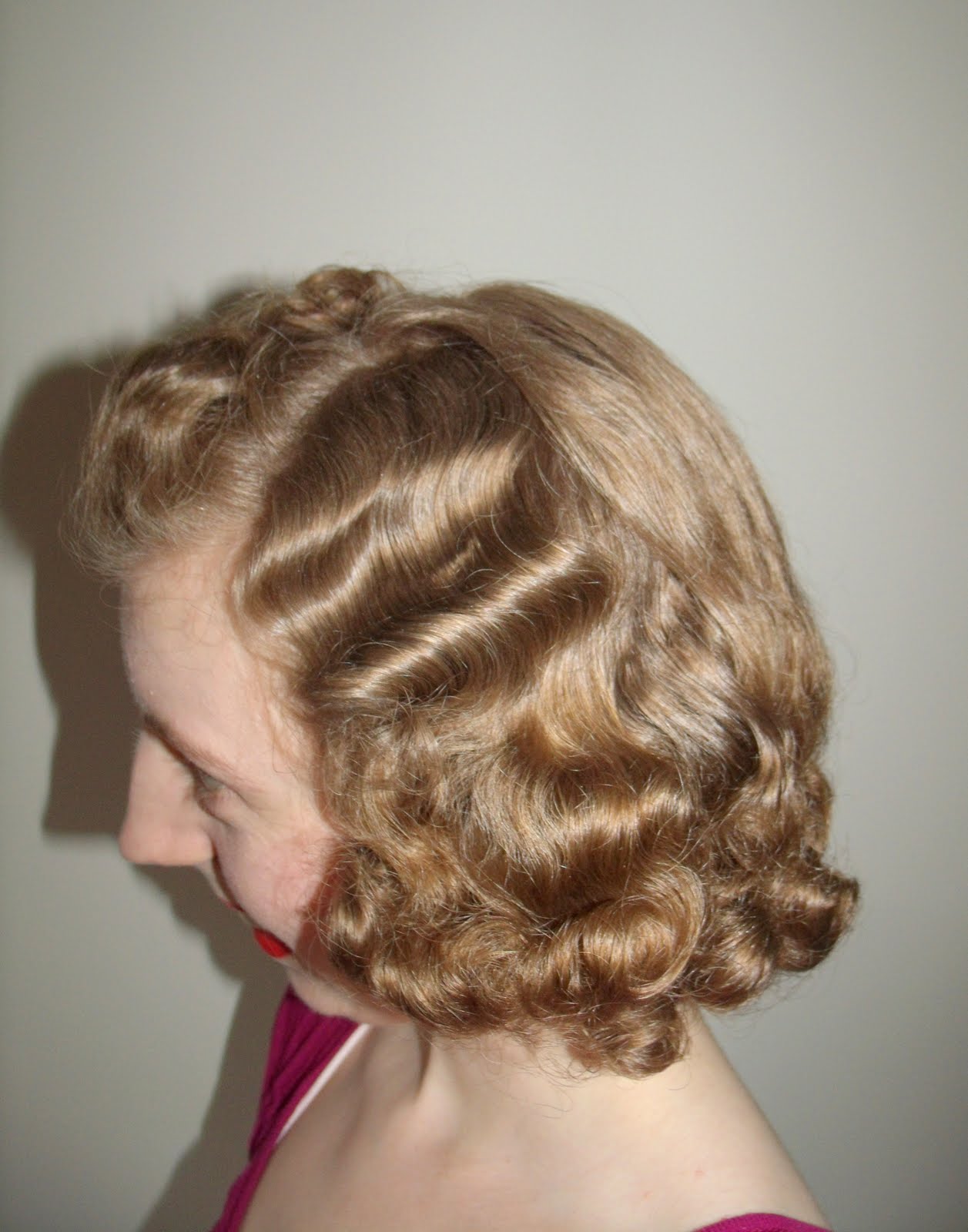