And the rarely spotted curly top!

Well here’s a snap to mark the momentous (simply earth shattering!!!) occasion of yours truly actually setting her hair for the first time in about three weeks, (this is quite unlike me I must say!) and for my Sister dearest who wasn’t very pleased with me when she came home to find a scruff!  See sissy dear, I’m back to normal and have my curly top back!

What-ho folks!
I’ve just been thinking that I haven't shown off any of my recent(ish) knitteds lately. I now intend to correct this and yes, show off one of me woollies!
This one was knitted from the intriguingly named 'Date Maker' pattern found here<< 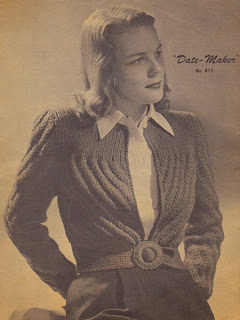 It was love at first sight for me as it comprised of all the things I like in a knit..... Nipped in waist, thick wool, and big needles. Perfect!
Immediately cogs started turning (the few that I have) as I saw potential…. To me it had the look of the Military. A waisted jacket with a buckle fastening is very battledress like don’t ya think? Well that’s how the design spoke to me, and as I’m rather partial to a nice battledress or two I thought I would make one of my very own. I originally had visions of it being in a kaki, but apparently that shade isn’t in vogue at the mo. My visions were dashed for a whole minute until I looked heavenwards in the wool shop and spotted some wool babies of the purest air force blue! It was meant to be….. a sign….The wool babies spoke to me…. Tupney dear, you don’t want a kaki BD. Tell me, what sweetheart brooch would you wear upon it? Now Tupps, what you need is an air force blue to wear with one of your countless pairs of wings! You need me… buy me… knit with me... Yes, of course! You are quite right oh mighty wool baby…. I shall take you home…. Gosh, how could I have ever thought differently!
And so, the Kaki BD was confined to history and the air force coloured BD reigns supreme!

It caused quite a rumpus on its first outing too! Ok, it wasn’t actually  the jumper, and  it wasn’t two dashing young AC’s fighting over me (mores the pity!) but a WOMAN quite stuck in her ways ( and incorrect ways at that), saying that the wings I was wearing (upon my very lovely jumper!!!) were wrong as they carried the ‘Queens’ Crown…. Oh and remind to tell you the whole story at a later date wont you!
It’s a shame really as I shall always think of this jumper as the Jumper I wore when I nearly had fisticuffs with a WOMAN outside the Tourist Information, and not the Jumper I wore when Trevor Howard took me boating on the lake…. Well, that wouldn’t happen anyway but you know what I mean!

So there you are the trials and tribulations this Cardigan has brought me so far!

I have just remembered that I had this letter in one of my adopted photo albums.
This letter obviously meant a lot to the receiver as it was proudly stuck down in one of their albums.
Here’s a photo of the original. (please excuse my rather battered Poppy- It has been proudly worn over my heart since October, hence the appearance!) 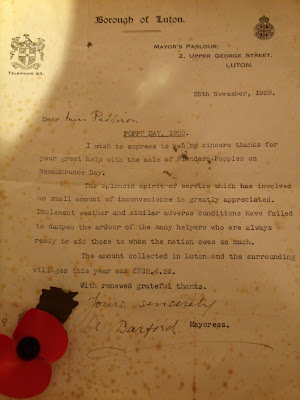 Poppy Day 1929
I wish to express to you my sincere thanks for your great help with the sale of Poppies on Remembrance Day.
The splendid spirit of service which has involved no small amount of inconvenience is greatly appreciated.
Inclement weather and similar adverse conditions have failed to dampen the ardour of the many helpers who are always ready to aid those to whom the nation owes so much. (Makes me rather teary reading these lines!)
The amount collected by and the surrounding villages this year was £732.6.2d.
With renewed grateful thanks.
Mayoress .
............................................................
Right ho
Off to collect a pile of hankies (and boy do I need those hankies!)  ready for tomorrows Royal British Legions Festival of Remembrance (sat 9:15 pm BBC1!) and Sundays commemorations at the Cenotaph! (BBC1 10:25 am). I can tell you there won’t be a dry eye in the house tomorrow evening….
Tata all!
Tupney xxxx
Posted by Tickety Boo Tupney - A Dash OF Worcester Sauce. at Friday, November 11, 2011 6 comments: