With a Tickety Twitch, Tupneys a Witch….

…though I’m sure most people would quite happily say that I don’t need to twitch to become a witch!

The last time I dressed up for Halloween was about twelve/thirteen years ago as I felt left out. My sister was going to a party as the Devil and had bought horns, a tail, and most importantly a pokey fork thingy… I think she even has a sparkly red top or dress! All very glamorous, though she would probably cringe if she saw the photos today!  Not fair I thought, so I decided to dress up as a pumpkin! All glamour me! To be honest it was all I could muster in such short notice, plus at the time it was very ‘me’. I seem to remember I was quite fond of brightly coloured jogging bottoms, and luckily I owned a green pair ( a fondness that has since been discarded I must add!), also I just so happened to posses a orange T–shirt.. Bingo! I had all the necessary bits n bobs to be one cracking pumpkin…. Well, apart from the necessary roundness! For that I had to shove a cushion up my orange tee and Bobs your uncle, Tickety’s a Pumpkin! I only treated one house but the pound and chocolate bar was enough to keep any pumpkin happy….. funnily enough never again did I dress up for Halloween……


But today I have decided to face those past traumas and once again dress up for the occasion by donning my most spooky 40’s hat!
And you have got to agree that my hat has that certain witch-esque charm! It’s quite a hat!!! I thought if I can’t wear it today of all days, then I don’t know when I can.
When I saw it I fell in love, and I just had to have it for my collection. Its soooo unusual and the georgette scarf notion reminded me of the hat Mrs Miniver bought in…..Mrs Miniver! Yes, I know it’s nothing like her hat but all the same it still reminds m.  ;)

I must admit the hat is rather a bit growdy-uppy for me- I’m far too cheeky to wear such a hat, but give me another decade or two and all will be dandy!
If age and wisdom fails to come knocking at my door then I’ll just have to learn how to be more dramatic. This hat demands to be worn by someone with great dramatic tendencies….. I see it being worn but someone flinging their being onto a sofa, draping themselves across it (a chaise longue is preferable and would create the correct dramatic effect for the scene), and with the bringing of their oh so tired arm to ones forehead to exclaim such twaddle about everyday life and how its such a tiresome lot, or something else of equal nonsense! It could work,  but personally I think I’ll  wait for the extra age myself!

Shoes but not for Me!

Life isn’t fair I tells ya! Just look at the shoes Mammy Tupney purchased the other day…… JUST LOOK AT THEM! She knows far too well how much I have been angling after a pair of shoes like these, and let me tell you, she knows it more than ever now! They are just the tops….. And they have the UTILITY mark to boot (or to shoe!), whilst boasting the fact that they are also unworn…UNWORN….. gah! I don’t even own a well fitting pair of vintage shoes in such marvellous condition, and now my Mammy has found such a pair…. Oh, I want to cry!
Also to make matters worse, (and if you are airy fairy like me, then things couldn’t get any…) on that very same we gazed upon those little (well big) cc41 corkers, I had also spotted some more utility shoes. Yes, TWO pairs of utility shoes in one day- I could hardly handle such an occasion. But, and again it’s another ‘but’ that doesn’t favour towards Tupneys shoe cupboard, this time they were men’s boots. I bought them anyway, as I have been after a pair of men’s clodhoppers for my collection for some time, but still….. I wish they were for little Tickety Boo’s tootsies…..Oh, and did I mention that they fit my Pappy L(well he’s not having them that’s for sure!) I say that’s double unfairness!
Thankfully, the day wasn’t all doom and utility gloom, as I did purchase something rather special (well it’s special to me), but you are going to have to wait a day longer to see it! 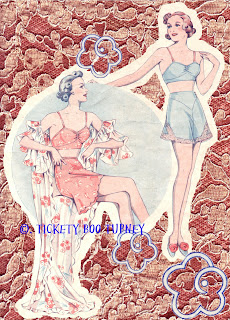 Right vintage knicker fanciers, I need your help!
I’m posting this request on behalf of someone else, and it’s pretty urgent!
Your quest is to name anyone who does good repro vintage underwear!
Right, got that? Knickers (most likely French due to the era!), bras, girdles/suspender bets, etc.
Next…The style has to be of those worn in the late thirties, give or take a few years!
Then they have to be in black and red. Actually, and it’s just occurred to me that it’s an ‘Oh piddle’ moment! I didn’t ask if they should be black or red, or black with a coloured trim or visa versa- Ah well you get the general idea!
I suppose the company should be UK based too! (but please do post any suggestions just in case!)
Any help would be greatly received.
I wasn’t much help as I don’t go searching for repro vintage undies- I make my own of sorts (well, just started to)! All I came up with was ‘What Katie Did’!
Just think, your suggestions will be helping a costume team for a period TV drama….. oooow arrrhhhh-  and no, I’m not saying what it’s for…. I’m saying nuffink!
TTFN
Tupney xxxxx
Posted by Tickety Boo Tupney - A Dash OF Worcester Sauce. at Wednesday, October 05, 2011 13 comments: 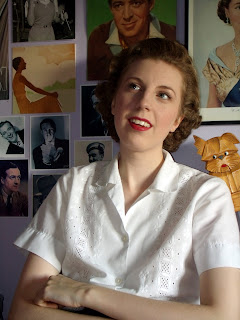 Well folks, I have been less than enthusiastic about anything of late, as you can probably tell by the lack of wittering on the old blog.  Hopefully, fingers crossed, from today I shall be taking more time to sort out stuff to share, as ‘spirits’ are rising!!!  Last Tuesday, after a long, long wait (a year and a half since the last!) I final got another perm (she says with a beaming smile J), and let me tell you it has pepped my spirits up tremendously!
I have even taken photos to show the results! It’s quite, shocking to see the difference between the post perm/ pre set and post set pictures.It’s like seeing a totally different person- Oh the miracles of hair and makeup….. *cough* I mean its all natural…what, WHAT! What do my little ears hear? Oh, it’s those Dick Dastardly little pixies from up the garden, calling out ‘year right’ and ‘in you dreams’!!
Anyway, I have just realised that I had forgotten to take a picture of my hair do before I had the perm, but let me tell you it was awful, and you need not know anything else about it, let alone see it!

I am extremely sorry for the large amount of ‘me’ pictures,  but if I’m gonna show my curly top off then my noggin has to be in it as well…. Sorry!
On the up side you do get to see some of my pin ups!

BEFORE....
Just after I had the perm- second photo showing a washed out Tupney with no make up and modern top- ahhh 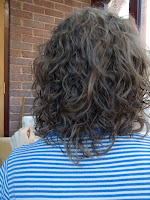 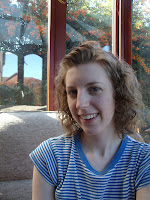 AFTER...
Once I had set my hair in curlers.
Pictures taken in a cluttered bedroom (or my museum!)﻿﻿


﻿﻿
﻿﻿
You may also like to know that over a week on and I still have curls- rather more bouncy and poofy than the first 4 days of the set, but still respectable looking… even with the post perm frizz! Yesterday would have been 8 days, and in theory the day I should have washed it, but by the way it that looks I think I’ll hold out for a few more days…. Well, I’ve had enough of washing my hair after having the perm- I think I had my hair rinsed and washed FOUR times and usually that’s a months or so hair washing for me!

Well must go.
Blouse to make,
Stuff to sort!