“Dances and other gaieties are apt to entail diaphanous frocks in totally unsuitable weather! The fascinating “step-ins” opposite (‘wool next to the skin,’ though they don’t look it) are specially designed to end those agonising decisions between silk “beneaths” and a consequent cold next day and warm, but bulgy and uninspiring woollens.” 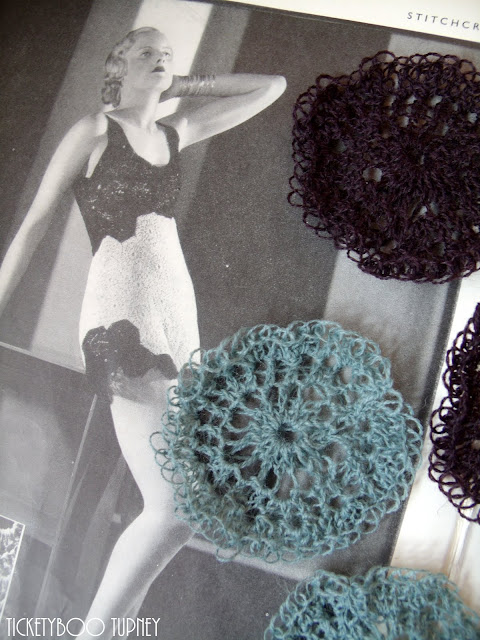 Before I start wittering on, I must apologise for the lack of clothes in the snaps you are about to see! I’m afraid you are going to see a little more of yours truly than you would have like… But hey, I could hardly show off undies fully clothed, could I?!
I tried my hardest to think back to when I started these beauties, but I just can’t remember. Yes, it has been that long… two… maybe three years ago… Oh, I don’t know! All I remember is that these cami-knicks were my first crochet project and that I started them on Boxing Day!
***
“…It takes astonishingly little time to crochet and join up the little circles that form this adorable garment- in fact two people working at it together, one crocheting and one stitching, could finish the whole thing in an afternoon…”
***


^Ha! Excuse me whilst I roll around in fits of giggles. They must have had a right laugh when they wrote the above statement.  I’m not related to Speedy Gonzales, so it took me a darned sight longer to complete than an afternoon!
The sewing up caused me nothing but angst (I think they were flung across the room a few times!), but looking at them now, I think they were totally worth going through the stressy stages for!

"AHHHHHHHHH- much nakedness!"
﻿
“backless and clinging, and as frivolous as chiffon”

The original number (the one beautifully modelled in the Stitchcraft at the top) was crocheted in a shell pink and black. I didn’t have any pink in my stash at the time, so I chose this lovely duck egg blue and aubergine instead- rather dashing combo, I thought!
I’m afraid I am unable to share details about the wool I used. I have no idea as to the make or weight- it all entered my wool stash unlabelled! I’m guessing the blue is equivalent to a lace weight and a 2ply for the darker one...

I only made a couple of changes to the pattern- You know, because I know so much better!
The original gusset idea had to go (really didn’t like how it bunched around the legs), so I crocheted a strip and attached it to where the original gusset would have been, and then filled in the bit between the legs with an extra circle and some trebles. Now, instead of it bunching in an ugly way, it ‘skirts’ the hips like a short slip- much better! Not that you can see any of these changes in my pictures- just take my word!

We had a bit of bother finding ribbon to match for the straps, but luckily Ma found this eyeletty stuff (yes, that's the proper name). It still didn't really 'go', so I decided to crochet a couple of strips to weave in and out just to tie it all in.... aww, ain't it pretty?!

Well, I don't think there's anything else to add... but I will just say that I will be wearing more clothes the next time you see me... promise!

Posted by Tickety Boo Tupney - A Dash OF Worcester Sauce. at Friday, December 11, 2015