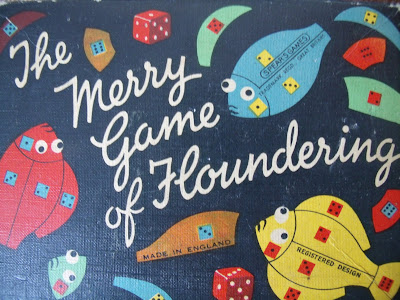 Any game that incorporates the word ‘ merry’ into it’s name or advertising, is most certainly going to be coming home with Missy here.
This edition of 'The Merry game of Floundering’ has such a chirpy illustrated box, and being only 30p (I think) meant it didn’t stay long on the shelf!
Dating from the Fifties and reading on the back of the box ‘Grandma Welch 1950’ (very handy indeed when it comes to dating an item!) and I'm guessing by this inscription that Grandma gave this game as a pressie!
Made by Spears games and made in . 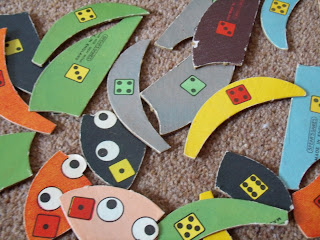 Ah, look at the pretty colours...
I’ve never played this game before so I’ll read off some of the instructions…..
Most of you have fished for flounders with a rod and line, now how about trying with dice?
It is a peculiar game because you seldom catch a whole Flounder, but are liable to get it piece.
Sometimes it so happens that you are lucky enough to ‘rob’ your fellow angler of one of his ‘catch’.
Shall we join in, and see who can catch the largest number of complete Flounder?
Its great fun and yet so simple…..
How to Play.
-Separate all the sections of Flounders- printed surface upwards.
-Each player throws two dice in turn and it will be noted that each section of the Flounders corresponds to the number of the dots on the dice.
-To start a flounder, 1 should be thrown, which corresponds to the head, then 2, and so on, till a complete flounder is formed. Should two numbers be thrown and correspond to sections next required for two different Flounders, these sections may be taken.
-The player is allowed to add the score of the two dice together if the total corresponds to the next section of the Flounder required.
-Players may start other Flounders before completing the first one. Each Flounder must consist of parts of the same colour.
-Should a player throw a ‘double’ this entitles him to an extra turn.
- When 6 and 1 are thrown, the player may take a complete flounder from the centre, and if one is not available, takes it from the play who has the greatest number of complete flounders. If two players have an equally large catch, this is decided by throwing the dice.
-If no more heads are available, players throwing 1 can take a head away from the player who has the largest amount of complete or incomplete. If part two and three are already been added to the robbed head, they are returned to the centre. Flounders which already contain part four cannot be taken away.
- Towards the close of play it may happen that only one head is available.
- If part two has already been added to this head it cannot be taken away. Players continue to until the owner of the last head has completed the Flounder by throwing the required numbers.
- The player who has the largest number of complete Flounders is the winner, the next largest, second, and so on. If two or more players have the same number, they decide the winner by throwing the dice. 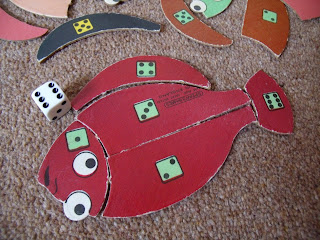