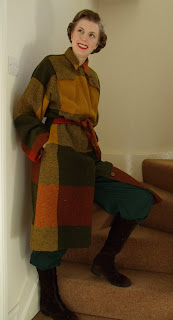 I promised pictures in my previous post, of my new curly top and snow outfit……
Again I used the trusty self timer which can produce some shockers of expressions, especially if you set it to the two second mode, which in turn, gives little time to get from the camera to the stairs, gather composure and look relatively nice (HA!)- It’s all rather manic if you ask me! With an abundance of pictures missing heads, the actual subject (old Tickety herself) here are the snaps I chose, that show none of the above mentioned…. As if I would let those loose on the interweb! Any-hoo here they be…. 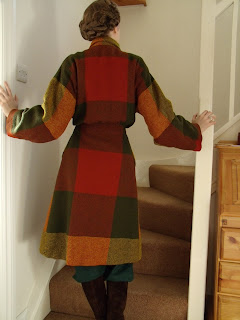 Showing off the the back of my coat and me hair!
I think my coat has a very military air -not in the colour and pattern of cloth way, but in the style of the coat top- very dress like…….
So that’s why I added the two of me in a man’s battle dress blouse. A little big I grant you, but I think it would be as equally warm, if a little itchier. I think, with the right slacks and so forth it could look quite dashing and be nice and toasty!
Mind you I don’t think I would wear it that often as I did have some trouble trying to get in and out of it. You see, it was the buttoning, being a Mr. Man jacket and all, it’s all the wrong way round….. Silly way, if you ask me! 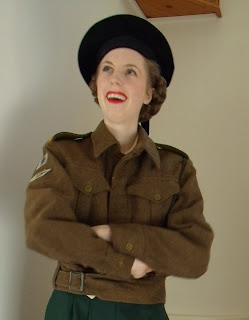 I think I need a pipe in this picture! 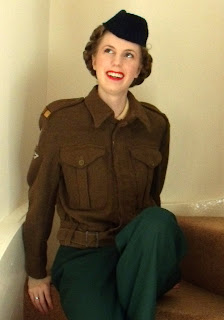 *Knitted Glengarry from a 1940's pattern.*
Not that you can see it very well, but if you are wondering about the insignia on the BD Jacket, then it belonged to a man in the Royal Tank Regiment (not sure which)- even has his name inside the jacket- (sniff, sniff.)
Off I must pop as I have Christmas cards and decorations to make…..
There’s a lot of little o’s in Cheerio’s (What?)
Tickety x
Posted by Tickety Boo Tupney - A Dash OF Worcester Sauce. at Thursday, December 02, 2010